Global and local innovators to take part in Innoteque 2019, an international event dedicated to innovation 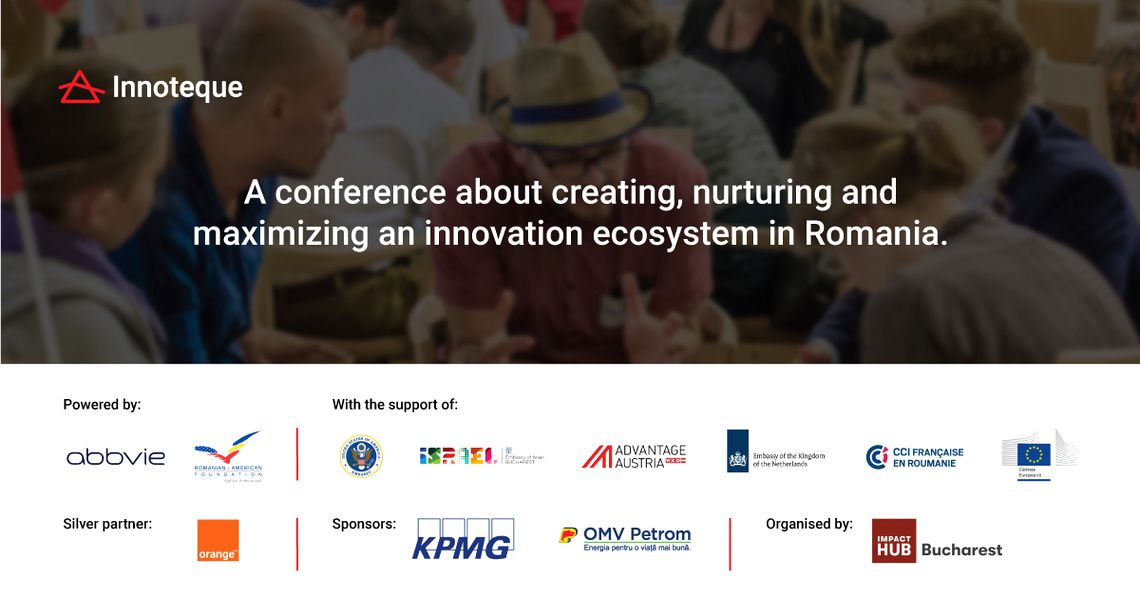 Innoteque 2019 will bring entrepreneurs, researchers, hub and company innovation department managers face to face with decision makers from Romania and Brussels to identify and promote key innovation policies with a focus on important sectors like health, energy, and agriculture.

On March 27-28, over 150 entrepreneurs and specialists from Romania, the US, Israel, Austria, the Netherlands and the European Commission will take part in a new edition of Innoteque, the most important event focused on Romania’s innovation policies.

The conference will be hosted by Impact Hub Bucharest and organized with the support of the US Embassy, the Embassy of Israel, the Embassy of the Netherlands, representatives of the European Commission, Advantage Austria, the Romanian American Fondation, Abbvie, Orange, KPMG Romania, CCIFER, and OMV Petrom.

In a European Union that places innovation at the centre of its strategy for economic growth, job creation and competitiveness, Romania still ranks last.

Since 2010, in the European Innovation Scoreboard, Romania has been on the last place in the EU for innovation, with a declining performance as a “modest innovator” compared to the EU average. In the European landscape, Bulgaria is the only other country in the same category. Although Romania has a new business creation rate (with over 10 employees) that is double the EU’s average (3.1 percent v. 1.5 percent) and a similar entrepreneurial activity rate (10.8 percent compared to 6.6 percent), spending on research and development in companies is almost 20 percent lower than the EU average.

The Innoteque international conference aims to create a framework for debate and cooperation between the main actors in the public and private sphere in the US, Israel, Austria, the Netherlands and Romania in order to identify solution to support performance in innovation in all sectors and thus contribute to the economic growth: higher education and research systems, entrepreneurship, legislation, new technologies.

“Romania has experienced impressive economic growth over the past two decades, due especially to the economic openness and integration with mature economies. This growth period is near the end, and in order to generate sustainable growth that translates into a better quality of life, Romania must learn to use its assets towards innovative technologies and solutions. That’s the only way to stop the exodus of competent people and ensure a good future for young generations,” said Andrei Roth, entrepreneur and manager of UiPath’s Cluj campus.

“We have so many underused competitive advantages as a country, in everything related to economic growth from innovation. Many are based on the traditions and legacy of a once very strong university education in STEM fields as well as the public R&D centre network, as well as others. Despite an increasingly dynamic startup ecosystem, a solid IT infrastructure as well as a development of the IT sector, and even through the public financing of the last two years, our performance as a country remains modest. Collaboration and building a functional ecosystem are our main purposes for this new edition of Innoteque,” said Oana Craioveanu, entrepreneur, co-founder and manager of Impact Hub Bucharest.

The event will take place over two days and bring over 40 speakers who are local and international experts. The first day is centred around two main discussion topics: one focused on trade and business and one on R&D and education. On the second day, the event will feature three panels on important sectors: health, energy and agriculture. There will also be an innovation fair where attendees will have the chance to meet and interact with 12 innovators.

Conclusions will be included in concrete proposals at a national level, then presented publicly and transparently in a public policy brief.