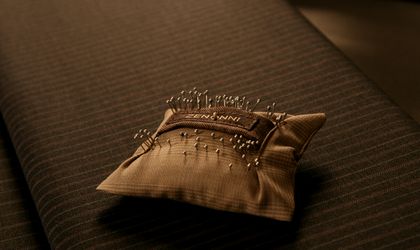 Zenonni Su Misura, a Romanian premium tailoring business of EUR 700,000 per year, has recently concluded a partnership with Scabal of Savile Row, the street of luxury tailors in London.

The company expects a 15 percent turnover increase in the first year of this new partnership, which entails the addition of Scabal made suits to Zenonni’s portfolio.

“In recent years our efforts have been focused towards offering highest quality products to support the successful entry into new markets. Therefore Zenonni chose to introduce Scabal as a standalone product,” stated Ciprian Vlad, co-founder of Zenonni.

The company is a family business present on the Romanian market for 12 years. It expanded to Chisinau in 2013 and in 2015 it opened its third showroom in Moscow.

Scabal group has 600 employees and 65 partners worldwide. It has been present on the Romanian market for 7 years and is known worldwide for providing outfits for famous Hollywood names (Daniel Craig, Pierce Brosnan, Clive Owen, Colin Firth), but also for films such as Golden Eye, Casino Royale, Men in Black, The Wolf of Wall Street and, not least, for Barack Obama, the US president.