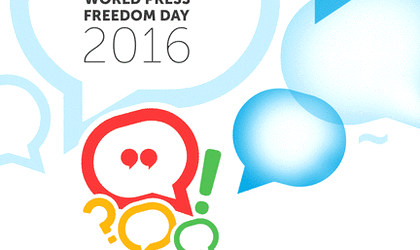 On World Press Freedom Day, celebrated yearly on 3 May, people around the globe recognise the fundamental human right of press freedom, weigh the state of press freedom around the world, and pay tribute to the journalists, editors and publishers who risk their lives in defense of the public’s right to know, notes Ifex, the global network of defending and promoting freedom expression.

Business Review made a list of the international indexes on the media freedom matter.

Romania ranks 49th in the 2016 World Press Freedom Index, unveiled by Reporters Without Borders on April 20, 2016, while we had climbed three places from last year when we ranked 52nd. Romania has a score of 24.29 and ranks better than Hungary, Italy, and Bulgaria, and just behind Poland, France, and the US.

Reporters Without Borders also highlighted the main problems of the mass media in Romania: “excessive politicization of the media, corrupt financing mechanisms, editorial policies subordinated to owner interests and intelligence agency infiltration of staff – such has been the impact of the media’s transformation into political propaganda tools, which has been particularly visible in election years, including 2014.”

Pressure on journalists in Europe increased substantially during the first quarter of 2016, reports submitted to Index on Censorship’s Mapping Media Freedom platform show.

Between 1 January and 31 March 2016, Mapping Media Freedom’s network of 19 correspondents and other journalists submitted a total of 301 violations of press freedom to the database, a 30 per cent rise over the fourth quarter of 2015. For Romania, on the same period, 11 reports have been submitted. The latest case presented on the platform is Journalists sentenced to pay €3,300 fine for slander

Romania scores 38 in 2016, while in 2015 we scored 42, being considered to have a partly free country. Forty-one percent of the world’s population has a Partly Free press, and 46 percent live in Not Free media environments. Moreover, only 13 percent of the world’s population enjoys a Free press—that is, where coverage of political news is robust, the safety of journalists is guaranteed, state intrusion in media affairs is minimal, and the press is not subject to onerous legal or economic pressures.

For 2015, Romania scored 46, being ranked as 58/168, meaning that corruption among public institutions and employees is still common.

Human Rights Report by the US State Department

US State Department recently published their 2015 Human Rights Report and Romania’s profile regarding media freedom isn’t the greatest one. “Personal and professional threats to journalists undermined media freedom. (…) The law’s restrictions on insulting state insignia; religious defamation; denying the Holocaust; using fascist, racist or xenophobic symbols; commemorating individuals who committed crimes against mankind; or promoting fascist, racist, or xenophobic ideologies apply to the print and broadcast media as well. While independent media were active and expressed a wide variety of views without overt restriction, politicians and persons with close ties to politicians and political groups either owned or indirectly controlled numerous media outlets at the national and local levels. The news and editorial tone of these outlets frequently reflected the views of the owners. There were also allegations that owners suppressed stories at odds with their interests or threatened the authors of such stories.

Media outlets controlled by politicians Dan Voiculescu (the founder of the Conservative Party, who was in prison for corruption and under investigation for blackmail) and Sebastian Ghita (a member of the Social Democratic Party who was under investigation for corruption) repeatedly attacked journalists who reported on their businesses or on the government’s activities against them. The two politicians owned television and radio stations that hosted most of the talk shows featuring members of the governing coalition.” Read the entire report here.