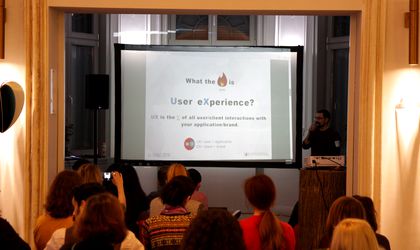 After the edition in Iasi, WIAD came back to Bucharest, re-becoming the capital of the information architecture in Romania. The conference, organized locally by Grapefruit and being at the seventh edition in Romania, took place at the same time in 56 locations, 25 countries, on 5 continents.

The event was under the umbrella „Information Architecture for Good”, reaching subjects very popular at the moment, from chatbots, artificial intelligence, advanced analytics, to storytelling and outside-the-box thinking. The presentations comprised case studies with the subject “A detailed analysis of the conversational form”, created by Grapefruit’s representatives: Alecsandru Grigoriu, Victor Keller, Andrei Balanica.

„This edition of WIAD was marked by a central subject. Without prior coordinating ourselves, several speakers, including the colleagues from Grapefruit, approached the same subject: chatbots. It is clear that the interest for this technology is rising and the informational architecture lays at the basis of any future <

If some of the presentations were exclusively based around the idea of information architecture, meant to give valuable insights, Dragos Manac focused his presentation on what defines the good and how it can translate in today’s technology. Vlad Tausance closed the event with a presentation about the language used by chatbots, putting the emphasis on the importance of a well written and natural text that should be created by linguistic specialists and young people with creative qualities and abilities especially developed in the area of writing a special, different message, with well chosen and well used words. A manifest for the writing, speaking and addressing into a beautiful, non-mechanical language.