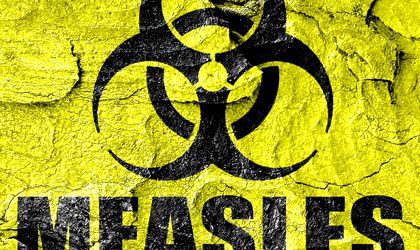 Cases of measles in Europe have hit a record high during the last year, and Romania ranks fifth by incidence rate, with 17 cases per 1 million inhabitants between July 2017 and June 2018, according to the World Health Organization (WHO).

Romania has reported 1,357 cases of measles between July 2017 and June 2018. Romania was hit by an outbreak of measles in 2017, but this year the number of new cases declined to around 100 per month, according to WHO.

During the first half of this year, Romania has registered 616 new cases of measles.

Over 41,000 children and adults in Europe have been infected with measles in the first six months of 2018, WHO data show.

“The total number for this period far exceeds the 12-month totals reported for every other year this decade,” WHO said in a report released on Monday.

Monthly country reports also indicate that at least 37 people have died due to measles so far this year.

“Following the decade’s lowest number of cases in 2016, we are seeing a dramatic increase in infections and extended outbreaks,” Zsuzsanna Jakab, WHO Regional Director for Europe, said.

“We call on all countries to immediately implement broad, context-appropriate measures to stop further spread of this disease. Good health for all starts with immunization, and as long as this disease is not eliminated we are failing to live up to our Sustainable Development Goal commitments,” she added.

Seven countries in the Region have seen over 1,000 infections in children and adults this year (France, Georgia, Greece, Italy, the Russian Federation, Serbia and Ukraine).

Ukraine has been the hardest hit, with over 23,000 people affected, accounting for over half of the regional total.

Measles-related deaths have been reported in all of these countries, with Serbia reporting the highest number of 14.