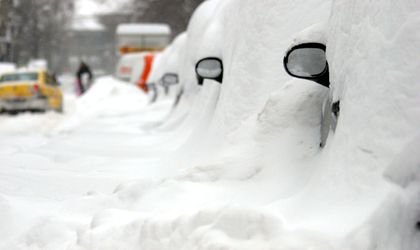 After a night-long snowfall, on Wednesday morning Bucharest inhabitants woke up to fairytale views but also snow-covered sidewalks and delayed transport. While Bucharest’s two airports remain open, Mayor Gabriela Firea called on everyone to remain indoors, if possible, at least till noon.

On Wednesday morning, pictures posted on social media accounts showed Bucharest’s streets taken over by snow and many walking on the roads, as sidewalks were fully covered in at least one meter of snow.

Bucharest’s airports, Henri Coanda (Otopeni) and Aurel Vlaicu (Baneasa) are open and none of the flights was canceled. Landings and departures are conducted in conditions of safety, with some having delays on takeoff, a press release by the Bucharest National Airports Company (CNAB) informs.

According to Bucharest Mayor Gabriela Firea, the Bucharest metro has included more trains in order to face the increased traffic, and the transport capacity of buses, trolleys and trams was increased by 40 percent. There are 770 buses and 250 trams on the capital’s roads, Firea said.

Early in the morning, the Bucharest mayor warned that those who can avoid going outside, should do so, at least until noon. “Around 11, experts say, snowfall will be less strong, but it will snow until lunch-time. If someone does not need to go somewhere urgently, should give up on the trip at least until noon, because then interventions will be more efficient, not only on boulevards, but also on secondary roads,” Firea said.

Schools have been closed since Monday, January 9, and will open on January 16. When announced, the measure caused controversy, with some questioning Mayor Firea’s move. “The solution to close the schools was a wise one, despite compleints, There are over 250,000 students. You can imagine how transport would have looked like,” Firea said.

The University of Bucharest will also remain closed on January 11, 12 and 13, a last-minute announcement informs.