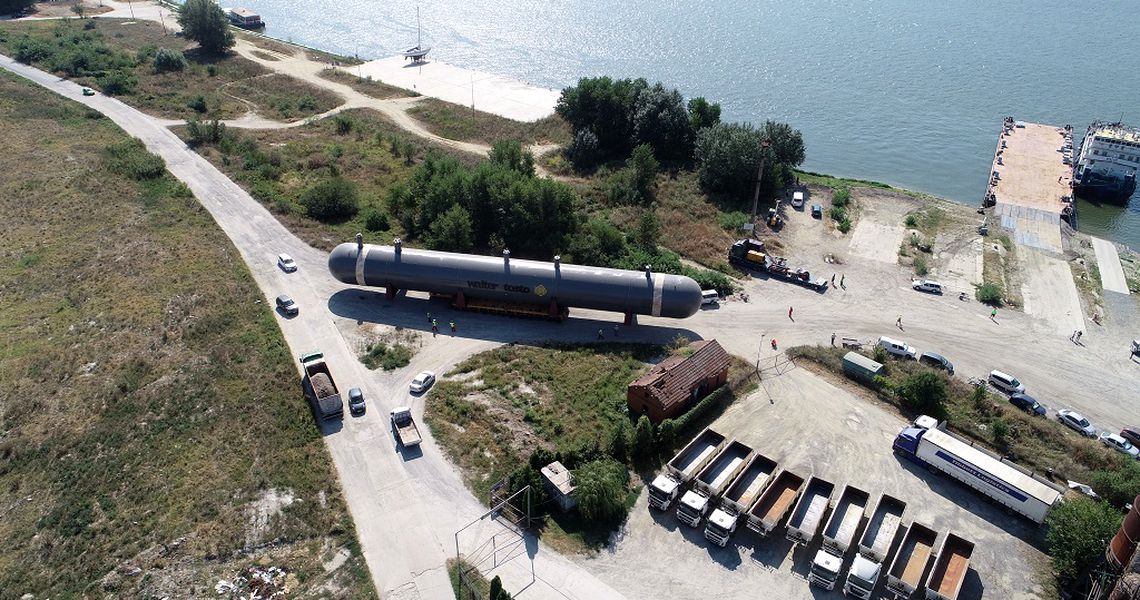 Walter Tosto WTB, the former Fecne plant on the IMGB platform, recently delivered to Azerbaijan 6 gas storage tanks (underground tanks), each with a mass of 360 tons, a length of 56 meters and a capacity of 1,650 m3. The tanks are among the largest equipment ever manufactured by the Romanian industry. The length of these storage units is half a football field, an absolute record for Romanian industry.

“The equipment manufactured at Walter Tosto WTB is not the heaviest or most complex ever made in Romania, but it is the biggest in terms of length. It is a remarkable achievement of this factory. In the same hall where these were produced, much more complex equipment was created for the Cernavoda Power Plant. And it can be done now, because the equipment has been refurbished and brought to its initial parameters. Both the equipment needed for the retrofitting of Unit 1 of the Cernavoda Plant, as well as the equipment for Units 3 and 4 of the factory, if they are made, can be made at Walter Tosto WTB. This was the purpose of the factory from the beginning: making equipment for nuclear power plants,” says Emanuel Babici, former IMGB director, former deputy minister and state secretary of the Industry Ministry, currently the vice-president of the Uzinsider group of companies.

The construction of the equipment took 9 months, and was completed entirely at the Walter Tosto WTB factory. From here, the giants left went to Oltenita, from where they were transported directly to the client.

The transport of oversized equiment in Romania encounters difficulties and a factory like Walter Tosto WTB, which has almost only oversized transport, also has problems. The company’s representatives, as well as other factories in the heavy industry are complaining about the bureaucracy related to the authorization of this type of transport, as well as the excessive taxation practiced by the state.

For an order that involves the construction of several similar pieces of equipment, separate projects must be developed for each of them, meaning repetitive costs and fees. In addition, companies claim that taxes applied to large-scale transport at the local level are several times higher than in other EU countries.

Furthermore, there is a danger that the transport infrastructure that is currently under construction will not facilitate the exit routes to the Danube of factories that produce very large parts. If an oversized transport route to the Danube is not assured, then the great competitive advantage of factories in Bucharest, namely the distance of only 50 kilometers from the Danube, could be nullified.

“Constant dicusssions are maintained with CNAIR representatives regarding the modernization project of the Bucharest Ring Road, as well as the construction of the Ring Road Motorway, as industry can be permanently affected, going as far as factory closures, unless an access corridor for for oversized transport to Oltenita is not built,” say representatives of Walter Tosto WTB.

In addition to gas tanks for Azerbaijan, Walter Tosto WTB can also boast other pressure equipment it has built and delivered, such as those with a 12.5 meter diameter, the width of a two-lane road, a proof that Romanian industry can still perform. However, this was only possible after considerable investments from the owner of Walter Tosto SpA, who bought Fecne in 2011. At this moment, the factory has unique machines in Romania and even in SE Europe.

Walter Tosto WTB is due to increase its production capacity, with a new factory under construction in Oltenita, which will have a surface area of ​​72,000 square meters and will be ready in the spring of next year. The advantage of these units is their proximity to the Danube, making transport of parts to customers much easier.

Romanian Association for Pressure Equipment & collaboration with other industries

At the beginning of 2018, Walter Tosto WTB initiated and founded ARPE – the Romanian Association for Pressure Equipment – whose members include a majority of local manufacturers of pressure equipment as well as companies that operate horizontally, with services related to the industry.

In addition to internal actions, the association has established collaboration protocols with other associations such as: ROMATOM – for the nuclear industry, ANCONAV – for the shipbuilding industry. At the same time, ARPE representatives actively participate in events that discuss topics related to the energy industry, within events organized by Chambers of Commerce or establish discussions with representatives of state-owned companies and ministries, to highlight problems that members encounter or to address the smooth development of the relationships that involve the interaction between the members and these entities.

A project that could provide a lot of work for the remaining Romanian heavy industry is the rehabilitation of Unit 1 of Cernavoda, because there is enough capacity and knowledge to build part of the necessary parts internally. The retrofitting is already certain, and will start in 2025 – 2026, the estimated cost of the works being EUR 1.5 billion. In addition, the factories are waiting to see whether something else will be implemented with Units 3 and 4, which have been announced for years, but almost nothing has been done in this regard. It would be over EUR 7 billion worth of investment, of which the contribution of the local industry in the supply of equipment can reach 30 percent or even more.

“The products manufactured within the Walter Tosto WTB are found on all continents, attracting the attention of the largest beneficiaries in the Energy and Nuclear industries. In such reference projects, at a global level, other profile companies which are part of ARPE may be involved in the future. Even if they’re not all at the same technological level and do not have the same production capacity, they have chosen to actively participate in specific events in their industry or other industrial branches, connecting and presenting their products and the services they provide. The involvement of Walter Tosto WTB in nuclear projects will also draw attention to the importance of the existence of the ARPE association, whose members we support in obtaining authorizations from CNCAN and CNCIR,” said Lucian Rusu, manager and president of WTB, president of ARPE and vice president of ROMATOM.

Walter Tosto WTB is the only local company that can manufacture large equipment for the Romanian Chemical, Petrochemical and Nuclear industries. It has an annual turnover of over EUR 20 million, over 250 employees and works almost exclusively on export.

Since 1968, Fecne has been the main factory for the supply of reactors, pressure vessels, heat exchangers and heavy welded structures for nuclear power plants in Romania. After more than 30 years of activity, in 2006, Fecne entered a judicial reorganization process. In 2011 it was taken over by Walter Tosto, attracted by its unique production capabilities in terms of weight and dimensions of equipment that can be made. At present, the factory is completely refurbished, has improved energy efficiency, new equipment and modern facilities for employees. Walter Tosto has 70 years of experience in manufacturing equipment for the processing industry, in particular Chemistry, Petrochemistry, Oil and Gas and Nuclear, and is today one of the world’s largest manufacturers of high pressure equipment and containers.In addition to the factory in Bucharest, Walter Tosto Group owns factories in Italy in Chieti, Mantova as well as in the port of Ortona, which is directly connected to the main international ports and routes.