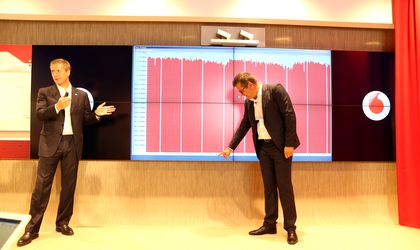 Telecom operator Vodafone Romania launched on September 5 the Supernet 4G+, which will provide extended benefits to customers available in all the 41 county capitals, Bucharest and other 330 localities, available for both prepay and postpay individual consumers and businesses, the company announced during a media event.

“Following the past two years’ consistent investments, our network has evolved significantly and now leads in leveraging the 4G+ technology for the benefit of our customers. We now launch Supernet 4G+ and provide higher speeds, the best mobile experience for HD video, as certified by the independent auditor P3 Communications, deeper indoor coverage and enhanced security. By mastering the 4G+ technology and our advanced mobile infrastructure, we were able to cross the barrier of 1 Gbps download speed in our tests. We have reached 1.35 Gbps, far ahead of what today terminals can sustain”, said Catalin Buliga, technology director, Vodafone Romania.

Buliga said during the press conference that although data speeds differ depending on the location, the Supernet 4G+ speeds will be double compared to 4G speeds.

“After providing our users with advanced services through Supernet 4G, we now launch Supernet 4G+, to offer a new generation of customer experience. With Supernet 4G+, we are able to offer the best combination of technology and services to drive the new trend of consumer behavior, which includes increasing data consumption on mobile and interactive gaming”, said Andrea Rossini, consumer business unit director, Vodafone Romania.

While all traffic in the Vodafone network has increased, video traffic increased by 25 percent in the total. Today, video traffic represents more than 50 percent of the data traffic. Vodafone anticipates as trends in customer behavior: increasing demand for bandwidth, new interactive applications, and increasing need for the security of personal information.

The company announced that for this launch, the network has gone through a significant overhaul. “This transformation of the network infrastructure is similar to the time when we were actually building the network. The level of investments into the network was also comparable to the input at that time,” said Buliga.

For this launch, Vodafone used a combination of two licensed frequencies, the 800 Mhz, which has the capability to go very deep into the buildings, as well as 1800 Mhz. The coverage inside the buildings was increased at maximum capacity, said Buliga.

With this launch, Vodafone Romania also announces Supernet 4G+ City in Cluj-Napoca and Iasi, which brings one entire month of free, unlimited internet usage to all the mobile service users located in these cities, between September 5 and October 5, 2016.

“Cluj-Napoca and Iasi are among the Romanian cities with the highest internet consumption andf youngest population. I am very curious to see which one of the two will do better,” said Rossini.

Supernet 4G+ is launched within a communication campaign that runs on TV, print, online and outdoor, built around the message “You have the power to make the impossible possible. Your trusted network, Supernet 4G+, supports you, with the best HD video experience”. The TV commercial illustrates the ultimate test for Supernet 4G+, performed by rally pilot Titi Aur, who took the challenge to race his car with blacked-out windows. He was relying only on the live streamed images of the track shot by smartphones installed on the top of the car, transmitted over Vodafone Romania’s network and displayed on tablets inside the car. His co-pilot in this endeavor was the TV personality Cabral.

Moreover, Vodafone Romania has expanded its 4G national network, which is now available in 3,500 localities.