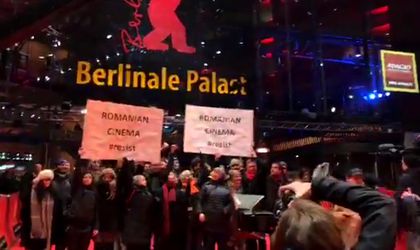 The Romanian delegation at the the 67th edition of Berlinale film competition staged a protest on the red carpet in Berlin, in support for the tens of thousands of Romanian that were out on the streets, calling for the resignation of the government.

Giurgiu posted a short recording of the protest on his Facebook page.

A similar protest was recorded at the British Academy of Film and Television Arts (BAFTA) Gala, where Romanian actor Levente Molnar was photographed on the red carpet holding paper with the following message: “#rezist”. Molnar starred in the movie “Son of Saul”, which won the grand prize in the best foreign movie category at BAFTA.

Romanian movie Ana, mon amour, directed by Calin Peter Netzer, has been included in this year’s edition of Berlinale.

Tens of thousands of Romanians formed a “human” flag in front of the government building in Bucharest, on Sunday evening. People continued to protest for the 13th night in a row, despite the freezing cold, calling for the resignation of the government led by Sorin Grindeanu.