Video. Around 250,000 protest in Bucharest, more than half a million in Romania against government 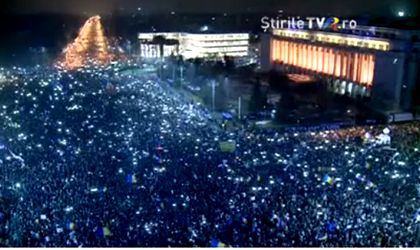 A record number of people – around 250,000 – took to the streets in Bucharest, on Sunday evening, calling for the center-left government of Sorin Grindeanu to resign, according to media reports. More than half a million rallied peacefully across Romania and abroad, hours after the government repealed controversial amendments to the Criminal Code and Criminal Procedural Code.

On Sunday evening, PM Grindeanu said he will not step down, despite the massive protests which have been recorded daily starting January 31, when the amendments were passed by the government.

Some of the politicians that are part of the ruling coalition PSD-ALDE said that the country risks slipping into a civil war unless a political compromise is struck. The head of the Senate, Calin Popescu Tariceanu, who is also co-chair of the Alliance of Liberals and Democrats (ALDE) said on Sunday evening he will send a letter to president Klaus Iohannis in a bid to find potential solutions to the political crisis that is quickly escalating.

“Similar to those that today are on the streets we also see the corruption that exists in Romania, but compared to them, as true liberals, we are not willing to ignore the slippages and excesses of the judiciary in Romania, the abuse of power of institutions and the breach of citizens’ rights and freedoms,” wrote Tariceanu on his Facebook page, adding that his party does not plan to organize any kind of protest.

The head of the Social Democratic Party (PSD), Liviu Dragnea, said that his party does not plan to suspend president Iohannis and that the priority of Grindeanu’s cabinet is to implement the governing program.

The government has come under huge street pressure about one month after being sworn into office.

A smaller protest was also taking place on Sunday evening near the Cotroceni Palace in Bucharest. Several thousands people, mainly seniors, were calling for the resignation of president Iohannis.

Students from across Romania arrived this weekend in Bucharest to join the massive crowd of people that rallied near the government building.