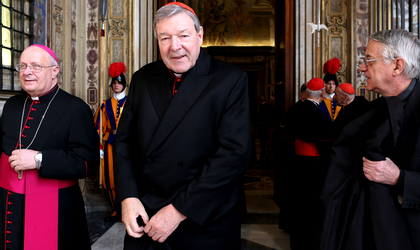 Cardinal George Pell, Australia’s most senior Catholic and the controller of the Vatican’s finances in Rome, has pleaded not guilty after he was ordered to stand trial over historical sexual offence allegations, according to The Guardian.

Pell has always denied the allegations against him, but it was the first time he had been required to enter a formal plea.

Many of the most serious allegations were dismissed in the Melbourne magistrates’ court on Tuesday, with witnesses described as unreliable and lacking credibility. But a number of charges were ordered to go to trial. Further details of the nature of the charges are unable to be reported for legal reasons.

Magistrate Belinda Wallington handed down the decision following a committal hearing that lasted almost a month throughout March and April. Pell was surrounded by police as he was quickly ushered into the court just before 9.30am, and was met by a small crowd of supporters and opponents.

Wallington told the court that if the evidence was not of sufficient weight to support a conviction, an allegation must be discharged. If the credibility of a witness was destroyed during a committal, their allegation could not go to trial, she said. Cases so weak a jury could not possibly convict a defendant had to be thrown out.

A number of charges had been withdrawn during the committal hearing. Wallington found it was impossible that a further group of charges relating to one complainant could be sustained. The offences were alleged to have occurred over 12 months and the complainant alleged he was removed from the St Joseph’s boys home and from his dorm, and taken to the locations where he alleged the offences occurred.