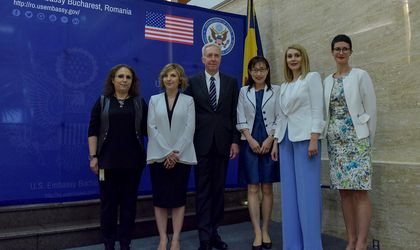 The US Embassy in Romania has awarded “Women of Courage” as part of an international initiative to honor women who exemplified exceptional courage and leadership in advocating for human rights, women’s equality, and social progress – often at great personal risk.

The principal honoree was named Elena Calistru, the co-founder of Funky Citizens NGO.

“These last two facts – 40 volunteers and significant personal donations, in a country where the vast majority of people view volunteering as a waste of time and supporting NGOs the job of the government or foreign donors – are perhaps the greatest testament to Calistru’s leadership and her organization’s credibility and unique capacity to create hope and civic engagement in Romania,” said the US ambassador Hans Klemm.

The first award went to chief prosecutor Ioana Albani. She became deputy chief prosecutor of the Directorate for Investigating Organized Crime and Terrorism Offences (DIICOT) in June 2016.  She was the head of the Cyber Crime Unit within DIICOT for over 13 years, and previously she led the first specialized unit on cybercrime and money laundering within the former Section of the Romanian General Prosecutor’s Office.

The new award was received by Daniela Staicu and Alina Tiplea, the co-founders of MerciCharity, an NGO dedicated to providing basic dental care to impoverished children.

Freelance journalist Paul Rusu has been awarded for her efforts to raise awareness regarding tuberculosis in the health sector. She is currently working to have Parliament adopt a TB-dedicated law that would solve certain issues related to the poverty affecting TB-infected persons and contributing to the spread of the disease.