US department of state spokesperson: “We urge the Parliament of Romania to reject proposals that weaken the rule of law and endanger the fight against corruption” 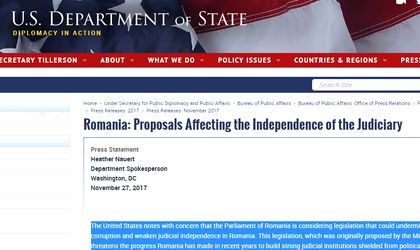 The US department of state has reacted to the efforts of the ruling coalition PSD-ALDE to change the judiciary laws in Parliament.

Heather Nauert, department spokesperson, said in a statement that the American authorities urge the Romanian Parliament to reject any changes that undermine Romania’s rule of law.

“The United States notes with concern that the Parliament of Romania is considering legislation that could undermine the fight against corruption and weaken judicial independence in Romania. This legislation, which was originally proposed by the Ministry of Justice, threatens the progress Romania has made in recent years to build strong judicial institutions shielded from political interference. We urge the Parliament of Romania to reject proposals that weaken the rule of law and endanger the fight against corruption,” said Nauert.

The reaction of the Trump administration comes following massive street protests recorded in the past few Sundays in Romania against the changes to the judiciary. Last Sunday, tens of thousands of people marched on the streets of the largest Romanian cities, calling for the withdrawal of the controversial changes from Parliament and for the resignation of the center left government led by Mihai Tudose.