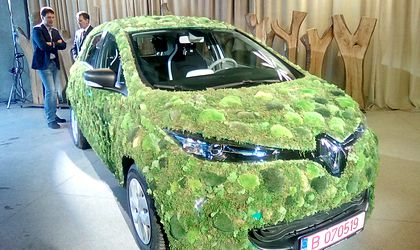 Uber has launched in Bucharest its Uber Green service, using a fleet of 20 electric cars Renault Zoe in partnership with Eldrive. The Romanian capital becomes the first city in the CEE to benefit from the service, so far available in Amsterdam, Paris, London and Lisbon.

According to Nicoleta Schroeder, general manager Uber Romania, the launch of Uber Green, the first fully electric ride sharing service is a new way to show commitment to the city of Bucharest. “We all know that Bucharest is one of the most congested cities in Europe and we want to be a trustworthy partner of the local authorities to tackle traffic,” she said.

Uber Romania: the future of transport is electric, shared and autonomous

The pilot service will have 20 cars, Renault Zoe, and are provided in partnership with Eldrive. “The purpose of the pilot is to democratise access to transport. We want to have partnerships with actors in energy field, authorities to develop the infrastructure in Bucharest. Romania continues to be an important market for us, as it is the second largest in the CEE and fifth in the EU, despite being one of the last countries to see the launch of Uber,” the Uber general manager pointed out. “If we continue to grow at this rate, by 2020 we could launch in Bucharest Uberpool, which can reduce traffic by one third,” she said.

According to the Uber representative, the company aims to reach 10,000 users by the end of April.

US Ambassador Klemm: Uber one of most innovative American companies

The service was launched in the presence of US Ambassador to Bucharest Hans Klemm, who reaffirmed his support for the company. “Uber is one of the most innovative Amserican companies. It has had a disruptive effect on the lives of Americans and now in Bucharest too. To help launch this new green service that Uber will be providing is important across several dimensions. Uber will continue to provide a service that will improve their mobility, reduce convention, a factor of life that we all face. Now it will offer an environmentally friendly way of doing that and will contribute to the increase of the quality of life,” the diplomat said.

“The service is introduced here after only four other cities in Europe. Bucharest now finds itself in this category, even before Munich. It is a tremendous statement to the commitment of Romanians to adapt to new technologies and services available when opportunities present themselves. I wish a great success and have no doubt that will soon be coming. And if there is any other way for myself and the embassy to support Uber expands its services, please do not hesitate to let us know,” he concluded.

Bucharest gets Uber Green before Munich

The Romanian capital sees the launch of the Uber Green service before Munich, Germany, and is only the fourth European city to offer Uber users the service, after Amsterdam, Lisbon, Paris and London.

“The fact that we launched before Munich is something worth being stressed. A big factor is the fact that the local team got involved and we started working on the project in May. But the environmental factors are the most important. Bucharest is way more polluted than Munich, and that is why the central management prioritised the city before Munich. In Lisbon, for instance, where the service was launched three months ago, it saved over 23 tons de CO2 in 3 months, ” Alexandra Aparaschivei Corolea, Uber’s senior communications associate for East Balkans told Business Review.

The pricing of the new service is the same as that of Uber Select: RON 1,65 base tariff per kilometre.

According to Adrian, Uber partner: “The car was the main draw for me when I decided to join the Uber Green program. Also, the fact that Uber Green is a service that many clients will want to try.” Adrian has been a Uber partner for 8 months and works as a sales representative for Vodafone.