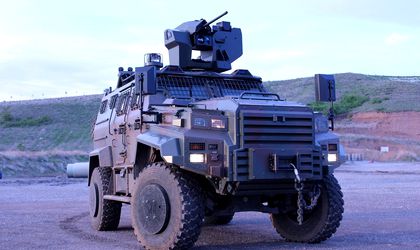 The Turkish company Nurol Makina plans to produce 4×4 bullet-proof vehicles  in Romania for the defence industry, the value of investment being at least EUR 15 million.

The members of the Administration Council and the executive directors of Nurol Holding and Nurol Makina met with the authorities within the Ministry of Economy and the representatives of the business environment from Bucharest in the first half of November to discuss the opportunity of bullet-proof vehicles production in Romania within a Romanian-Turkish partnership.

The plan comprises initial investments of at least EUR 15 million growing yearly, made together with Romanian companies. The vehicles produced target both the Romanian market and the European and Asian markets. Through the Romanian-Turkish association, the company is looking at the the production of other types of bullet-proof vehicles in the future.

“Nurol Makina plans a long-term collaboration with the Romanian firms producing equipments for defence industry and bullet-proof vehicles, about which knows they have a superior mobility and the easy exploitation in urban areas. We see the collaboration with the Romanian companies of this profile as a binder between the defence industries between the two countries,“ said the representatives of Nurol Makina.