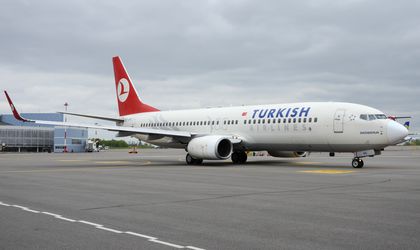 A Turkish Airlines aircraft carrying a passenger suspected of typhoid fever was isolated this evening on Otopeni Airport. The 194 passengers on the flight are still in the airplane, which arrived from Istanbul at 19.45.

UPDATE: The citizen who showed signs of typhoid fever has been transferred to the Victor Babes hospital after being examined by specialists, while the rest of the passengers got off the plane safely around 9:50 pm, without risking contamination, according to a statement by the National Bucharest Airport Company.

Health minister Sorina Pintea was at the airport last night to coordinate the emergency procedure: “I wanted to make sure the procedure for this type of situation is followed strictly and I can say that things were done correctly. It wasn’t a serious situation, but I am certain that if things were ever worse, we would manage well,” she said.

The passenger was returning from Africa, where he had been diagnosed with typhoid fever. Upon showing several symptoms of the disease, his wife called the emergency number 112. A team coordinated by Secretary of State with the Ministry of Internal Affairs Raed Arafat went to the airport to provide assistance.

According to the authorities, the passenger is not contagious.