Top companies, connected devices and startups competition at the 4th edition of Techsylvania 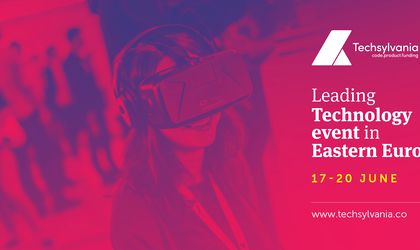 This summer Cluj-Napoca becomes the connecting point between IT  and business experts at the leading technology and innovation event from Eastern Europe, Techsylvania. This year, the event will take place between June 17th-20, at the Students` Culture Hall.

This edition brings names such as Ralph Simon, the inventor of the ringtone for the mobile phone and CEO of Mobilium, Alexis Bonte who is the cofounder of eRepublik Labs and Executive in Residence at Atomico, one of the top VC funds in Europe, Krating Poonpol, partner at 500 Startups and voted business man of the year in Thailand or  Martin Wezowski, Chief Designer at the SAP Innovation Center. The list is continuously growing with visionaries and innovators from the tech and business sphere.

The event takes place during four days, the first two being dedicated to a 24h connected devices hackathon, where passionate developers gather under the same roof to create and develop new innovative apps. The participants will have the option to code on new gadgets like drones, VR glasses, smart watches and others. At the end of the hackathon the best project will be awarded with high-tech prizes.

On the third day, besides the conference, an international competition for startups, called Startup Avalanche will take place, in partnership with Risky Business. Here, the companies will have the chance to pitch their project in front of investors. The prize is a trip to Silicon Valley, where the winning team will have meetings with investors and entrepreneurs, which will help them identify the right opportunities to grow their business. More information about speakers line-up, hackathon, Startup Avalanche and details about tickets for the event can be found here: http://www.techsylvania.co.

Techsylvania could have not taken place without the support of our partners, which work on developing the regional community`s passion for technology and actively help on maintaining the status Transylvania created for itself internationally.

Banca Transilvania, the bank for the Romanian entrepreneurs and an active supporter of startups is this year’s main partner.

Techsylvania is an event aimed for tech savvies and business passionates. The event was created four years ago by Oana Petruș and Vlad Ciurca, with a noble goal: to become a connecting point between local communities, newest trends in the industry and also the most influential people in the technology industry. Last year over 1,300 passionates attended the event and as the number of participants grows yearly by a double digit margin, Techsylvania has proven to be the leading technology event in Eastern Europe and Romania.