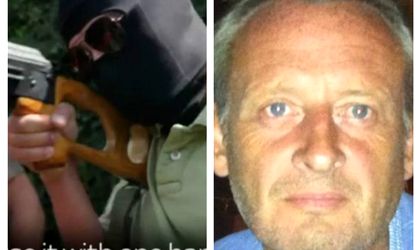 Now that prosecutors in Romania said that the whole feature report of Sky News on arms traffickers from the country is fabricated, and the so-called weapons dealers have been detained by authorities, let’s look at the key features mentioned by the British journalists in their piece and compare them to the information provided by investigators.

Sky News said in the report that the traffickers had a AK-47, “the terrorists’ weapon of choice”

According to the Directorate for Investigating Organized Crime and Terrorism (DIICOT), “Because the British journalists wanted to have on film military grade weapons under the AK brand,  the defendant Szanto Aurelian-Mihai had borrowed from another person a UM SADU weapon,   calibre 7,62X39, a collector’s item that he legally owned.”

“In ill faith, knowing that the hunting weapons that the Romanian defendants (for part of the weapons they had permits), were presented and filmed as military grade weapons, they presented to the public (the report being broadcasted by the British TV station) a scenario in which, if proven true, it would have created the impression that the Romanian authorities don’t manage or are not interested in managing the so-called problem created by the sale of firearms within its borders, due to incompetence or corruption,” added the DIICOT.

The fixer of this story was contacted in July 2016 by a British journalist he had met before. The journalist told Aurelian-Mihai Szanto that he was planning to make a documentary about arms traffickers and asked him to find people that could showcase their weapons.

“The defendant Szanto Aurelian-Mihai said that he can’t showcase military grade weapons but only hunting weapons that were legally owned by one of his friends in Romania, and the respective journalist agreed. Following this discussion, the defendant Szanto Aurelian-Mihai got in touch with his friend, defendant Pántics Attila-Csaba, who agreed with his request, adding that he will show the weapons together with his cousin, Pantics Levente,” said the DIICOT.

“The British journalists offered the defendant Szanto Aurelian-Mihai EUR 2,000 for the ‘journalistic investigation’, out of which he got EUR 1,000, while another EUR 1,000 would be split by defendants  Pántics Attila-Csaba and Pantics Levente,” said the DIICOT.

Sky News said in the report the traffickers made it clear they would sell weapons to anyone, including terrorists

The DIICOT explained that after the team of British journalists was picked up by Szanto at the airport on July 29,
they talked about the filming in detail.

“The defendant Szanto Aurelian-Mihai was told that the people that appeared on film as ‘arms traffickers’ should wear hoods. He also got the questions and answers for the so-called traffickers, including the prices for some types of weapons,” said prosecutors.