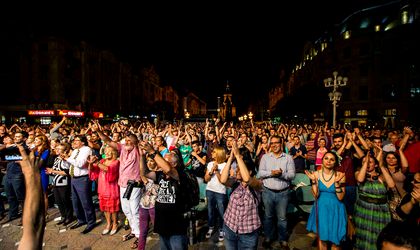 Here’s what you can do this summer in Romania. There are a lot of festivals you can enjoy, be it music, movies and theatres. BR has prepared an exclusive list with the best cultural events that you shouldn’t miss.

Cluj is getting ready to celebrate the 15th edition of the largest film festival in Romania. The first confirmed titles, either Oscar-nominated or productions awarded at Berlin, Cannes, Venice, Toronto, Locarno or San Sebastian, are the work of masters such as Alexander Sokurov and Terence Davies and tell fascinating stories from all over the world. Over 2,600 artists and guests will some to 68 venues to witness over 430 performances and events, produced in 70 countries. One of the most eagerly awaited guests at this year’s event is Tim Robbins, known to Romanian audiences mainly for his role in The Shawshank Redemption.

Jazz in the Park

Music lovers will flock to Cluj’s Central Park to meet and greet the jazzmen. The organizers have yet to announce the lineup, but previous years have seen top jazz singers perform in the western city.

Timisoara’s Victoriei Square, Justice Park and Civic Park will be jazzed up. So far only two artists have been announced: BadBadNotGood, a young band from Toronto, and Dhafer Youssef, a Tunisian artist known for his unique combination of Sufi traditions, mystical and jazz influences and Arabic lyricism.

Yuri Honing Acoustic Quartet, Enrico Rava, the Kari Ikonen Trio, Magnus Öström Band and another 80 jazz artists will perform in one of the most amazing green spots in Romania, at the 20th edition of the well-known jazz festival. Banffy Castle, in Bontida, will host four days of live music. Sigur Ros, Skrillex, Bring me the Horizon, Bastille and many others will perform on one of the eight stages.

Twelve years ago, folk artist Florian Pitis launched Folk You, with a manifesto of “the resistance movement against poured stupidity”, in Vama Veche, Romania’s southernmost Black Sea resort, and the festival is still a beacon for music lovers.

Those tired of the noise and bustle of the city can head up to 1,500 feet, to the Padina Fest, for camping, forest fun and good Romanian music.

No introduction is needed for Muse and Iron Maiden, the headliners of the rock festival which will take place in the capital.

Romania’s biggest electronic music festival, which won the Best Major Festival title at the 2015 European Festival Awards, will bring back to its stage artists such as Armin van Buuren, DJ Hardwell, who was voted the best DJ in the world in 2013 and 2014, and Afrojack, another top 10 DJ.

The idyllic backdrop of the Danube Delta and Black Sea adds to this festival’s charms. The movies are usually selected from international film festivals.

Live music, art performances, workshops, great food and lots of exciting moments in front of the three Spellground concert stages, all with an amazing view, is the promise made by the organizers. The Kooks and Röyksopp are the headliners, but the rest of the line-up is also impressive. Dubbed “a festival like a holiday”, the event brings together the Chemical Brothers, Hurts, The 1975, Years & Years, The Neighbourhood, BØRNS, Blossoms, HONNE, Sundara Karma and HÆLOS in the beautiful gardens of Stirbei Palace.

The Divan film and culinary art festival once again brings the spirit of the Balkans to an old Danube grain-shipping port, with food, movies, documentaries, debates and workshops, all at Cetate Harbor.