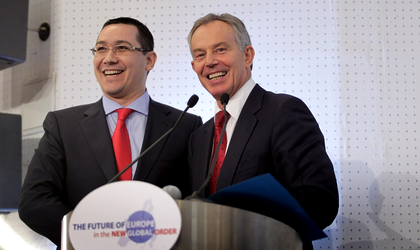 Former Romanian PM Victor Ponta was placed under judicial control in Romania, as part of an investigation involving the appointment of a businessman as candidate of left wing party PSD in the last Parliamentary elections.

According to sources quoted by HotNews.ro, the businessman was ordered to cover the costs of a visit of former British PM Tony Blair in Romania. Anti-graft prosecutors at the DNA did not mention the name of Blair, but said that the businessman was asked to pay for the visit of a “foreign public personality”.

The DNA said the businessman paid EUR 220,000 that was hidden through a chain of contracts. He was elected deputy in the Romanian Parliament. The prosecutors said that the inclusion of the businessman on the lists of candidates breached elections legislation in the country because it might raise suspicions of illegal campaign financing.

The name of Blair was also mentioned by MP Sebastian Ghita, a close friend of Ponta, who was also questioned by prosecutors in this case. Ghita is a controversial businessman who has set up various firms, focusing primarily on IT. In the past few years, he said that he was giving up the control of his businesses because he was put on trial by DNA prosecutors in at least two cases.

Read what was the reaction of Tony Blair’s team

Ponta is prosecuted for use of influence for gaining for himself or others money, goods or other undue benefits and for complicity to money laundering. The former PM, who serves as deputy in the Romanian Parliament, is already on trial in a separate case.

“To create the appearance that the visit of the former foreign leader in Romania does not take place at the initiative of the party, it was determined that the overall activity to be organized by a nonprofit and apolitical organization, which might give the impression among the public that the meeting between the foreign public person and Ponta Victor Viorel would be held at the initiative of the former. To this end, Ponta Victor Viorel together with businessman have asked the representative of the nonprofit organization to find a way by which the foreign politician to be summoned to Romania without it being known that the initiative belonged to Ponta Victor Viorel and the payment occasioned by this event is supported by businessman through a company controlled by intermediaries,” said the DNA in a statement.

The media reported that Ponta met with Blair both in 2012 and 2013. In March 2012, Blair held a key-note speech at the conference called The future of Europe in the new global order. The event took place months before the suspension of president Traian Basescu and the last round of elections for Parliament.

The event was organized by The Multimedia Foundation for Local Democracy and the Center for American Progress.

The former PM posted pics from the conference on his blog. The conference had among participants former presidents and heads of governments in Romania.

Ponta wrote on his Facebook page that he would challenge the decision of the DNA and that he can’t talk about his case.

In the past few years, Ponta claimed that Blair was a political inspiration for him.