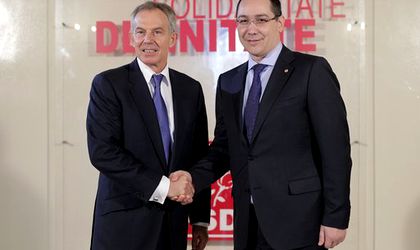 The team of former British PM Tony Blair issued a statement after the media reported that the key-note speech of the foreign politician in Bucharest was paid by a businessman that was looking to get elected in the Romanian Parliament.

According to anti-graft prosecutors at the DNA, the businessman paid EUR 220,000 so that the foreign politician could come to Romania at a conference. In exchange, the businessman was put of the candidates list of left wing party PSD, which was lead in 2012 by former PM Victor Ponta.

The DNA said the businessman is Sebastian Ghita, a close friend of Ponta who became deputy in the Parliament four years ago.

“Mister Blair was invited in Romania to hold a speech about the future of Europe, responding to an invite of the Multimedia Foundation for Democracy. The amount that Mr. Blair got from the foundation was fully donated for the charity activity of Tony Blair”, said the communication team of the ex-British PM in a statement, quoted by Antena 3 TV station.

Prosecutors said that the payment was made through intermediaries so that nobody would suspect Ponta that he came up with the idea of inviting Blair into the country.

The British politician held his speech in March 2012, months before the elections for Parliament. In the summer of 2012, a political coalition led by Victor Ponta was able to suspend president Traian Basescu following a vote in Parliament, but his impeachment was rejected in a popular referendum vote due to insufficient turnout.