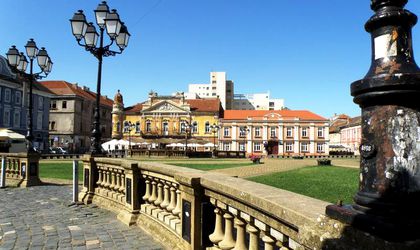 The news that Timisoara was chosen the Capital of Culture in 2021 was greeted by thousands of people who gathered on Sunday night in Victory Square. Romania’s third largest city won the bid on September 16, after competing alongside Bucharest, Cluj-Napoca and Baia Mare.

The announcement, made by Steve Green, was received with enthusiasm by Timisoara officials. “I am very happy, like all of Timisoara, for winning of the title of 2021; It was a very tough campaign, the competitors were very strong (…). From now on we must focus to get ready for 2021, so that, from all points of view, the city can deserve this title and to be at the highest level,” Nicolae Robu, Timisoara mayor said.

Upon finding out the news, Bucharest mayor Gabriela Firea said she was neither surprised nor worried, as she is aware that the capital was not a favorite in the race. “The EU strategy on the matter is to support certain underdeveloped regions to enter the European circuit,” Firea said. “This is the reason why, from the beginning, Bucharest did not have the best odds in this competition (…) What is more important, is the process, the competition itself. Because each participating city builds a cultural strategy on the long term, it plans certain cultural activities for its inhabitants and takes concrete steps to support cultural diversity. Bucharest already did this. We have a cultural strateg, something we did not have before. We have a coherent program of cultural activities, something we did not have before, we have a clearer vision for bringing the cultural phenomenon closer to citizens, to stimulate cultural activities and to develop the cultural infrastructure in neighborhoods, not only in the central area. All these that with us after the competition,” Firea explained.

“I congratulate Timisoara inhabitants, as I did with mayor Nicolae Robu and I assured him of the full support of the Government, including financially, to bring to an end this honor and responsibility,” PM Dacian Ciolos Ciolos wrote on Facebook. “I am certain that also this time Timisoara inhabitants will gather around this common project and we will gather all energy and creativity to attain and surpass the standard set by Sibiu in 2007 in matters of European cultural projects,” the PM said.

“I take full responsibility for the strategic decisions and the cultural content proposed in the file. I believe in them in the same measure as I do in the integrity and the honesty of my colleagues. I regret that I could not be more convincing, that I did not find all the arguments the jury was expecting. I hope that the decision-making authorities and the community will decide to continue the flagship projects of the foundation: festivals, shows or training workshops. During the past year, we were a European Capital of Culture. It is up to us to continue,” said Vlad Tausance, artistic director of Baia Mare Foundation 2021, which was in charge of developing the city’s strategy in the bid to become the 2021 European Capital of Culture.

“Our effort, of the entire community, will not be without a result. We already gathered so many good things these years in Cluj and it is time to prove together that everything we discussed these years is indeed doable, with or without this title,” the representatives of the Cluj-Napoca 2021 European Capital of Culture said in a statement.