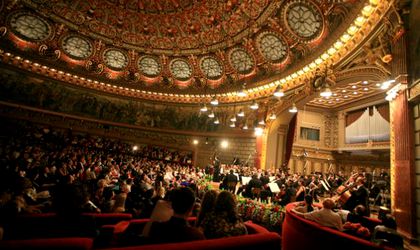 The tickets for the Opening Concert (September 3-25) and the Piano Finale of Enescu Concert 2016 are sold out. Tickets can be acquired for other recitals, as well as for violin and cello final galas from Enescu Contest 2016.

The International Enescu Contest 2016 brings 174 young artists from worldwide on the Romanian Atheneum between September 3 and 25, and also laureates from the previous years who developed an international career, as well as competition winners from 2014.

Tickets can be acquired for other recitals, as well as for violin and cello final galas from Enescu Contest 2016, where the costs are between RON 40 and RON 50.

In premiere, three artists, jury members as well, of this Enescu Contest edition will hold recitals on the Romanian Atheneum on September 7, 16 and 22.

On September 7 the cello player David Geringas will hold the recital together with Ian Fountain at piano. Geringas has Lithuanian origin and held concerts with big orchestras, such as Royal Concertgebouw, London Symphony and Vienna Philharmonic, being also a conductor. He won the golden medal at the International Contest Ceaikovski.

The violin Florin Croitoru will be on the stage on September 16 together with Verona Maier at piano. He was present at several editions in row of Enescu Contest. Croitoru is also professor at the Conservatory from Bucharest and he also taught for a while in US.