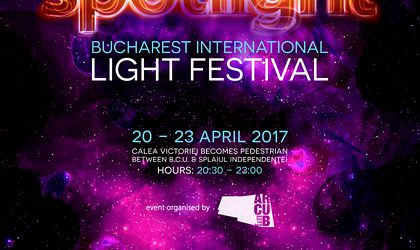 Bucharest International Light Festival – Spotlight, organised by Bucharest City Hall and ARCUB – The Cultural Center of Bucharest, returns with a brand new edition designed to reinvent the urban landscape of Bucharest through multimedia and digital art, this spring, from April 20 to April 23.

Starting from 8:30 PM up until 11:30 PM during festival days, Calea Victoriei is reserved to pedestrian traffic, from the National Museum of Art of Romania to Splaiul Independenței. Here you can admire over 20 installations, architectural projections and video mappings that transform the area into a huge open air exhibition.

The event attracted more than 200,000 visitors in 2016 and this year announces Phoenix Fire Dancers as its third edition’s opening act, a light show to be performed by Austrian company Phoenix in George Enescu Square, on Thursday, April 20, at 8:30 PM.

Amongst 2017 edition novelties, Art Safari takes part in the Bucharest International Light Festival with images of Stefan Luchian paintings projected on Grand Hotel du Boulevard windows. Another participant for the first time is the MotionLab team, nominated to take part in the world’s biggest light festival competition, The Circle of Light Festival, in 2016.

Mobius Gallery will exhibit one of its most recent art installations in the United Nations Square, while musician and visual artist Tom Brandus is included in the festival agenda with two multimedia installations, created by Sylenz Media. Furthermore, Spotlight’s third edition portfolio consists of creations signed by artists and studios from Germany, Hungary, Slovakia, Finland, Czech Republic, Poland, France and Austria. Mindscape and Les Ateliers Nomad are some of the Romanian artists showcasing exciting new projects at Spotlight 2017.

A highlight of the first two editions, the video mapping of the Military Circle (Cercul Militar) is making a comeback in 2017. Spotlight completely changes Hotel Novotel facade this  year as well, while the National Lottery building is brought into the attention of the public with a historically themed video mapping, for the first time. From the Central University Library of Bucharest, to the National Museum of Art or the Bucharest Telephone Palace, over eight emblematic buildings of Bucharest are shown in a new light during Spotlight’s third edition. Alongside architectural projections and video mappings, Bucharest International Light Festival – Spotlight is showcasing art installations awarded at light festival throughout the world, as well as projects presented to the public for the first time, flash mobs and DJ sets.

Spotlight 2017 international partners, Festival of Lights from Berlin and Signal Festival from Prague, are taking part in the Bucharest festival with installations and light projections from Austria, Slovakia, Finland and Germany.