The support message sent by an international rock superstar to Romanian protesters: “Your voices have affected change before and they will again” 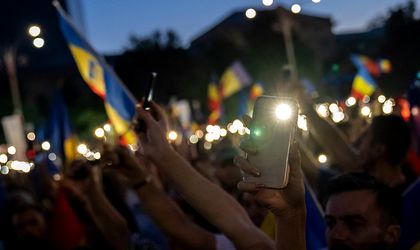 Serj Tankian, the Lebanese born, american rock superstar, known as the lead vocalist, songwriter, keyboardist, and occasional live rhythm guitarist of the alternative metal band System of a Down, formed in 1994, sent a powerful message via Facebook to all Romanians who protested in Victoriei Square and witnessed the violence of the Gerdarmerie.

“I want to extend our heartfelt support to all of our brothers and sisters in Romania fighting for justice and a better future for their homeland. Your voices have affected change before and they will again. There is no power in the world that can defeat the will of the people especially when a population practices decentralized civil disobedience. Much love”, Serj Tankian wrote on Facebook.

On Friday evening, during a Diaspora protest, over 100.000 people protesting against the PSD-ALDE government were evacuated by force with water cannons, tear gas and violence from Victoriei Square in Bucharest, where the Government building is. During the clashes 450 people were injured. During his musical career, Tankian has released five albums with System of a Down, one with Arto Tunçboyacıyan (Serart), as well as the five solo albums Elect the Dead, Imperfect Harmonies, Harakiri, Orca, and Jazz-Iz-Christ. A live orchestral version of Elect the Dead incorporating the Auckland Philharmonia Orchestra named Elect the Dead Symphony was released. In 2002, Tankian and Rage Against the Machine/Audioslave guitarist Tom Morello co-founded a non-profit political activist organization, Axis of Justice.

Tankian also founded the music label Serjical Strike Records, and is represented by Velvet Hammer Music and Management Group under System of a Down. On August 12, 2011, Tankian was awarded the Armenian Prime Minister’s Medal for his contributions to the recognition of the Armenian Genocide and the advancement of music.

He is widely considered and ranked as one of the greatest vocalists in metal history, with praise given to his unusual delivery and his wide vocal range. Serj Tankian is currently listed as one of the Top 100 Heavy Metal Vocalists by Hit Parader, ranked at #26. A study conducted by VVN Music found Tankian to possess a moderately-high and diverse vocal range, not only in metal, but in all of popular music, with a range of 4.2 octaves.