The social entrepreneurs and the ones in the creative industries have a free crowdfunding platform: consolid8 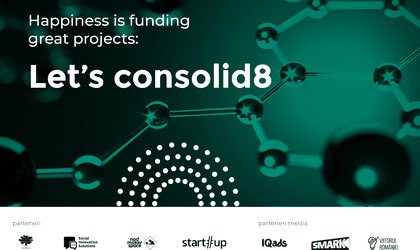 The team fonduri-structurale.ro, leader in informing and consultancy regarding the non-refundable financing in the last 14 years, launches consolid8 – the first crowdfunding platform for rewards dedicated to financing of the social start-ups and those in the creative industries in Romania.

The initiative comes in the help of those who need the most in this period alternative financing resources, offering them a free tool, in the first 6 months, through which they can develop projects with the direct help of their community.

„We’ve been working for 14 years with the entrepreneurs and this year we realized that, more than ever, the projects and the businesses that are at the beginning need our support, all of us. The experience in the non-refundable fonds field helped us create from zero, in just some months, a crowdfunding platform for the social and the creative industries entrepreneurs. Through consolid8, besides the discovering of innovative and visionary projects that need supporting, we want to attract the attention over the important role that we all have, as companies and as persons, in developing the businesses that bring a positive social impact in the community,” said Dragoș Jaliu, co-founder consolid8.

Any social or from the creative industries entrepreneur can roll financing campaigns on consolid8, if his / her business idea generates value for the community. The projects that respect the eligibility criteria will receive consultancy and support from the fonduri-structurale.ro team and the experts in the field, facilitating their entering on the platform and helping them promote their campaigns.

On the platform will roll between 2 to 5 crowdfunding campaigns at the same time, the entering and promotion being free, until May 2021, and their supporters have several rewards, of different values, that they can choose from, for their contribution to financing the projects. Later on, if the campaign gathers the requested amount of money, the campaign’s beneficiary will receive directly the amount in his / her bank account, through the partnership with the online payments platform Stripe, while the supports will received the products and services they opted for, directly from them.

Right now, on the platform are two campaigns. One of them is initiated by the team Moara de hartie, the team that created at Comana, near Bucharest, 10 workshops that promote the Romanian traditional crafts such as creating paper by hand, book binding and the hand press. The initiators proposed themselves to complete the Ansamblul Moara de hartie – Satul mesteșugurilor (Craftmen’ village)- by opening a kitchen that uses the seasonal ingredients from the local producers.

The second campaign belongs to Andrei Lasc, the youngster that brings poetry in his friends’ life on the online platform Facebook. Through the crowdfunding campaign on the platform consolid8, Andrei wants to raise the necessary money to launch the second book that he has been working on for many years, simply called, Poevie.