The shared office concept in Romania expanded from 2,500 sqm to 39,000 sqm in the last decade 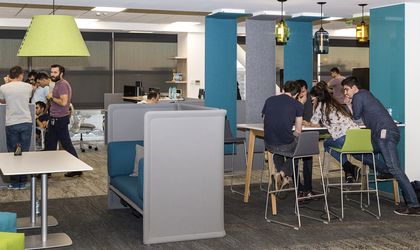 The concept of co-working and shared office spaces entered the Romanian market in 1998, when the Belgian group Regus opened its first location in Bucharest. Since 2008 to 2017 the total surface occupied by co-working operators grew from a little over 2,500 sqm to over 39,000 sqm and the network expanded to regional cities like Cluj-Napoca and Iasi.

The expansion was influenced by the development of the IT&C industry, the need for spaces where creative individuals can meet and collaborate and most importantly by the new generations‘ inclination towards alternative professions, which no longer require a steady workspace and a traditional working schedule.

2018 has been a turning point for co-working and shared office spaces in Romania. In the first half of the year alone, the surface dedicated to co-working spaces rose by 58 percent, reaching almost 68,000 sqm in July.

Bucharest is the main market for co-working spaces, with a 79 percent share in total. In 2018, shared spaces operators rented over 24,000 sqm in Bucharest, ranking 3rd in the leasing activity top for H1, after the IT&C and Energy sectors. The capital city is also the target market for international players within this segment, while the owners of co-working hubs in the regional cities are mainly young, local entrepreneur.

Young developers and artists discover more and more that they have a bigger chance of reaching their full potential by opening startups or working as freelancers rather than being a fulltime employee. Generations Y and Z need the space to express their creativity and free spirit and co-working helps turn these qualities into endless possibilities.

Innovative spaces, like the co-working tram in Iasi, or ideas, like the upcoming blockchain hub in Bucharest, will continue to appear over the next years. In less than a year, the co-working spaces’ share in the total office stock in Romania grew from 1 percent to 2 percent and the trend is rising. Large players are expected to enter regional cities while secondary markets will welcome small-sized hubs, operated by local entrepreneurs.