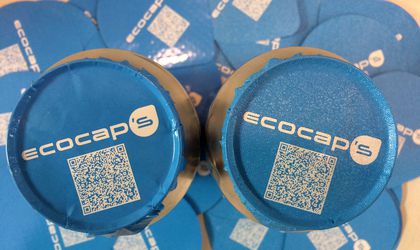 Based in Bologna, Italy’s ‘packaging valley’, EcoCap’s is the company behind the protective aluminum foil that seals the top of San Pellegrino’s colorful fruit beverage cans. Through a recent partnership with United Romanian Breweries Bereprod (URBB), the company entered the Eastern European market in a bid to make the technology it developed a worldwide standard in the beverage industry.

The recyclable aluminum foil, called Ecocaps, protects the beverage from any contamination, from the moment it leaves the production line, throughout storage and until it reaches the consumer. The aluminum foil is set through thermosealing, without the use of glue, by machines that EcoCap’s produces in Bologna and sells to beverage companies.  The solution was developed and patented by EcoCap’s partner Carlo Innocenti at the end of the ‘90s when cases of contaminated cans were detected in Europe. “All these cases brought up the problem of the can top, which is exposed to the environment and everything that lies on it, would then come in contact with our drink and our mouth,” EcoCap’s brand manager Jacopo Cassoli explains.

The invention enjoyed a flying start. After receiving the patent for the technology, EcoCap’s was created and, in 2003, delivered the first unit to mineral water brand San Pellegrino. Part of Nestlé Waters, the iconic Italian brand has remained until today the company’s biggest client. For the next ten years following its launch, EcoCap’s did not conclude any partnership, something Cassoli puts down to the reluctance of the shareholders to take on risks. “At that time, the company was managed by a group of shareholders, including my family. However, the holders of the majority share were afraid to offer and promote our system worldwide,” Cassoli argues. Things changed in 2013, when the Cassoli family purchased the majority stake and started looking for opportunities to expand their client base. “Since then we have found new customers, and now our system is a must in some countries,” added Cassoli, who argues that the green factor is a top selling point of the product. “Aluminum is 100 percent recyclable, and it can be disposed and restored an infinite number of times. As both the lid and the can are made of aluminum, they both have the same waste disposal method. That is why the consumer can leave the Ecocap attached to the can or inside the can. Moreover, the material is flexible, which means that is tamper evident. In fact, every time someone removes the Ecocap, it is impossible to replace it again on the can, and this is a further warranty for the final customer,” Cassoli explains.

The company operates exclusively out of Bologna, where its factory is located. Currently employing 35 staff, EcoCap’s posted a EUR 11 million turnover in 2016 and expects a 10 percent increase this year. “Our business model is different from common packaging machinery companies, because we do not offer only the EcoCaps themselves, but also EcoCap’s sealing units. As such, we are also able to offer different types of services beside technical assistance. For instance, we give support in the designing of the Alu-Lid, in some marketing campaigns and also when it comes to logistics,” the company’s brand manager tells BR.

Currently, EcoCap’s is present in four countries and has entered the Romanian market via its Turkish connection. “We have a great partnership with Turk Tuborg in Turkey, which has been very important in starting the relationship with URBB. Furthermore, we also have a good partnership with Turkey’s Anadolu Efes Group,” Cassoli explains. The company’s recent partnership with URBB opened the doors to the Eastern European beer market, which, he argues, holds tremendous potential. “Eastern Europe is a huge market, as the beer consumption per capita is higher than in the rest of Europe. Moreover, cans, in general, also in what concerns soft drinks, have a great presence thanks to their cost-effectiveness,” he explains, adding that the company’s ambition is to make the technology mainstream.