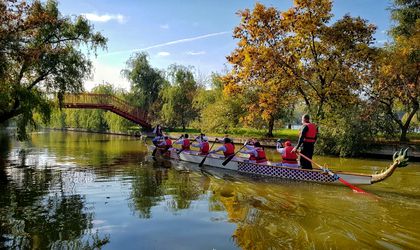 IMUNIS Dragons, the first Dragon Boat team in Romania, formed exclusively by breast cancer survivors, is now able to train indoors as well thanks to an ergometer bought with the help of the companies Novartis Romania and Superbet. IMUNIS Dragons is the first team of its kind to get certified internationally by International Breast Cancer Paddlers Commission.

Starting this month, when the weather allows it, the training will take place on the lake, in the IOR park, in Bucharest. The people with different oncologic problems that want to take part in the kayak-canoe trainings can enter the OncoPaddle team via an email sent at pentrupacienti@asociatiaimunis.ro, by mentioning the diagnosis.

The ergometer is a training apparatus that imitates the movement sequence practiced by the rowers in the boats. At the same time, with the help of the apparatus can be measured the individual capacity of each team member and the rowing technique can be improved, because the coach corrects the movements in real time. The ergometer is used globally by most of the professional sportsmen, its benefits being recognized by technicians and sports doctors.

The Dragon Boats became a global phenomenon, therefore in 2019 240 teams from 30 countries were affiliated to International Breast Cancer Paddlers Commission.  The rowing trainings in Dragos Boats were initiated in 1994 by Don McKenzie, the sportive doctor of the Canadian kayak-canoe national team, that formed a team of 20 breast cancer survivors that he trained for 6 months. At the end of the experiment, the doctor saw that none of the team members developed lymphedema.

McKenzie observed that the repetitive movement of the upper body (rowing) helps the body recover from the mastectomy operation, by rebuilding the lymphatic channels. Alongside the physical benefits, the fact that the training takes place outside, in teams and on water, helps the psychic team state of being, offers a good tonus to the participants and generates a team cohesion that creates the winner mentality.

„The fact that in Romania there wasn’t such a team motivated me the most…for the first time, in our country, the women that passed through this illness can recover by rowing together with us,” said Marian Baban, the IMUNIS Dragons coach.

The IMUNIS Dragons team will take part at the first international competition in Belfast (North Ireland), where will compete against the team Lagan Dragons, team trained by Marian Baban’s brother, but also with other teams in the competition. For 2023, the goal is to be present at the International Festival in New Zeeland.

The Imunis Association was launched in 2016, having as purpose the continuation of the innovative project started by Cosmina Grigore in 2015 – The New Patient Caravanne. Cosmina Grigore also received in 2015 the award Woman of the Year during the gala organized by the Avantaje magazine, for this initiative.