The Godfather of Private Equity in Romania | Obituary 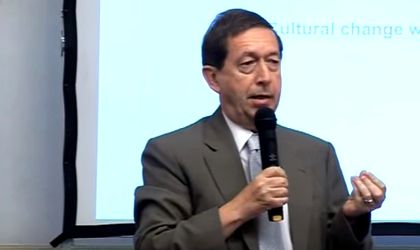 We have lost the godfather of private equity in Romania.

Robert Luke succumbed to a brave, and in his typical fashion, dignified, battle with cancer on 10 July 2016.

Robert was unquestionably the pioneer of private equity in Romania, and a man who dedicated a large part of his life to developing the country that he grew to love. His energy and efforts have left a lasting, positive impression on Romania, and the many people who had the pleasure to be a part of his personal or professional circles.

Robert came to Romania as the managing director of the Romanian Post-Privatisation Fund (RPPF). The RPPF was amongst the first institutional investors to take risky private equity stakes in Romanian companies, some of which had just come out of privatization. Robert’s bold efforts really help to set the stage and build comfort for future, private foreign direct investors in Romania.

Robert’s ability to identify ‘diamonds in the rough’ and polish them helped to improve the lives of many. Whether it was the generic pharmaceutical manufacturer Sicomed that he bravely took from a post-communist relic to a modern, leading producer at the highest of international standards…or the visionary development of the Italian-Romanian Industrial Development Enterprise, a modern class-A industrial / office park in Bucharest…or the scores of other projects that he took on and positively transfigured…Robert’s work has left Romania with many glowing examples of how hard work, integrity, and discipline can create jobs, improve conditions and provide a measure of steadfastness/confidence.

As a business leader, Robert was principled, respectful and disciplined. And he was generous, particularly with his time and support of others.  Whether he intended to be or not, Robert was a de facto mentor to many with whom he interacted, and a de facto ‘chairman’ to the many groups in which he was involved. In addition to being a founder of the South East European Private Equity Association (SEEPEA), he made time for many, supported scores, and elevated all with whom he interacted.

As an individual, Robert was quite simply a gentleman of the highest order. A man who exuded integrity, class and discretion. Anyone who interacted with him knew they were meeting a man who gave you a pleasured assurance that ‘old-world principles’ were still alive and well. And he was a man who loved. He loved his family…particularly his endearing wife, Gratiela, and his two sons Andy and Daniel. And he loved Romania, a country to which he devoted much of his life.

Where he stepped, he left only positive impressions.  He was a man who strove to help the country, companies, colleagues, friends and family that were involved in his life. And as such, he remains an inspiration and someone most of us that knew him want to emulate in some measure.

As we thank him for all that he did for us…may we also pray that Robert Luke rest in peace.