The future belongs to cyborgs. The scientist who connects the brain with AI comes to IMWorld 2019 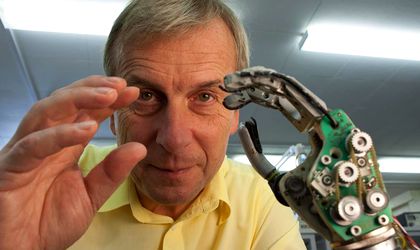 The indisputable star speaker on the Main Stage at the 7th edition of Internet & Mobile World is Professor Kevin Warwick, the world’s first cyborg: part man and part machine. His controversial work has earned him the nickname “Captain Cyborg”. Kevin Warwick is one of the researchers who have marked the evolution of mankind. He is one of only seven scientists – including Galileo, Einstein, Curie and Nobel – to be selected by the Institute of Physics to illustrate the ethical impact of their scientific work.

Professor Kevin Warwick, whose research focuses on AI, robotics and biomedical engineering, was involved in the design of an intelligent deep brain stimulation electrodes employed to overcome the effects of Parkinson’s Disease.

In fact, what for us, the uninitiated, are only SF scenes – bionic man, Iron Man from Marvel movies or intelligent humanoid robots – for Kevin Warwick are everyday realities. But they will be soon realities for us too, the researcher assures us.

“Already we’ve got robots with human brain cells, but the size of the brain, 30 million brain cells, it’s not the hundred billion of a human brain. But it’s getting there. Maybe 10 to 15 years, we’re going to have issues that we can build a robot with the brain with the same size as a human. Then you have to ask, should we give it rights?”

Professor Kevin Warwick, the cybernetic pioneer who is upgrading the human body – starting with himself. In 1998, the world’s leading expert in Cybernetics, had a silicon chip transponder surgically implanted into his left arm by his GP that could directly interact with the human nervous system and brain. “It would identify me to the computer in my building,” Professor Warwick recalled during a speech.

“As I walked around the computer knew it was me so it switched the lights on, and when I went towards the laboratory the door opened automatically. There was a telephone in the front door; it said ‘Hello Professor Warwick.’ It was tremendous fun. It was like having a smart card implanted, and it’s the same technology that now a lot of people have in their cats and dogs.” The success was just the start of his bionic transformation.

He achieved the world’s first direct electronic communication between two human nervous systems, the basis for thought communication. Another project extended human sensory input to include ultrasonics. He also linked his nervous system with the internet in order to control a robot hand directly from his neural signals, across the Atlantic Ocean.

Our future will be part human, part technology

On IMWorld’s Main Stage, the presenter’s own experiments will be used to show how implant and electrode technology can be employed to create such cyborgs and to realise biological brains for robots. We can both enable human enhancement and diminish the effects of neural illnesses. In all cases the end result is to increase the abilities of the recipients.

An indication is given of a number of areas in which such technology has already had a profound effect, a key element being the need for a clear interface linking a biological brain directly with computer technology. We will see how, with this technology, your brain can be in one place and your body can be wherever the network allows.

By linking your brain with AI so many new abilities can be realised – new senses, new means of control and new ways to communicate.

The presence of Kevin Warwick in Bucharest is supported by Raiffeisen Bank.

In estimated figures, IMWorld 2018 will have:

Access for the two quality business days proposed by Internet & Mobile World is exclusively based on a ticket that can be purchased from www.imworld.ro