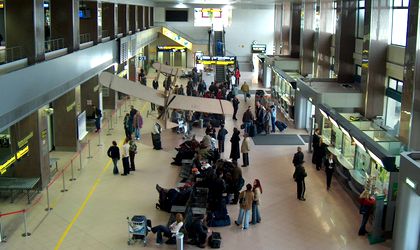 Taxi companies operating at the International Henri Coanda Airport (Otopeni) are threatening to boycott the airport, the country’s largest, starting Monday, unless the ads for ride-share service Uber are pulled. The announcement was made by the Confederation of Authorized Operators and Transporters in Romania (COTAR).

According to COTAR representatives, taxi companies are paying EUR 220,000 every year for the right to operate in the area. “We negotiated for years, for the activity carried out at the Henri Coanda Airport. We fulfilled absolutely all requirements. This summer, the Government felt the need to pass an emergency ordinance, to regulate the compulsory volume of cars providing taxi services at the airport.”

The taxi companies argue that Uber is advertised at the Henri Coanda Airport, ignoring the negotiations that were carried out between the two parties in the past years. “Now we are noticing with amazement that Uber is accepted and promoted as a taxi operator and for the transport of people, despite all negotiations that were carried out in the past years. We are entitled, due to the fact that we pay EUR 220,000 in tax every year, to give an ultimatum to those that run the Otopeni airport,” COTAR representatives say.

“Unless the billboard advertising Uber is removed, all taxi companies that pay taxes to operate at the airport will pull out of the airport. We are doing this for a fair economy in Romania, in agreement with the current legislation, but also because we cannot turn a blind eye to the dangers that clients are exposed to, by being misinformed,” the statement reads. The COTAR representatives also stated that they want to provide a civilized transport, with fair and fixed prices, displayed correctly and to guarantee the safety of clients that need taxi services.

“The Uber services in Romania is 100 percent digitalized and fiscalized. All partners in Romania are collaborating with Uber through a fiscal entity, and passengers receive a receipt after every course. Uber partners are independent contractors and are responsible for paying the taxes,” Uber said in a statement for Agerpres.