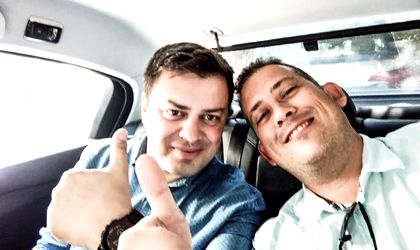 Uber has announced the chosen business idea that will represent Romania at the pan-European challenge UberPITCH – an elevator pitch on wheels, that allowed all those who had a start-up idea to present it on the back seat of an Uber trip to important entrepreneurs.

The winner is  Symme3D, a Romanian start-up that produces 3D printers in delta system in Timisoara and they are the first of this kind.

Patrick Gates, the new CEO of Symme3D had 7 minutes to present the winning idea to Andrei Pitis, founder and CTO Vector Watch.

Calin Brandabur, founder and chairman of Symme3D says that he “was glad to attend the UberPITCH challenge especially because it was a premiere- the first pitching mission of our CEO, Patrick Gates.”

Pitis said that he recommends the Symme 3D founders “because they attracted a CEO with experience, but also because of the technological innovations that they bring in their product, making it competitive at global level. “

Symme3D will enter into the European finals of UberPITCH challenge, where four winning ideas will be announced. The selected participants will then go to Berlin on June 8 and 9, where they will discuss their business idea with Travis Kalanick, CEO and founder Uber.

UberPITCH initiative took place during two weeks in 37 cities from 21 countries from European Union. In the end Uber challenge attracted almost 4000 business ideas. Romania is in the top seven countries with the most business ideas in UberPITCH, having 120 ideas subscribed.