Study: Slowed production from the past months will be adapted through increased output over the summer 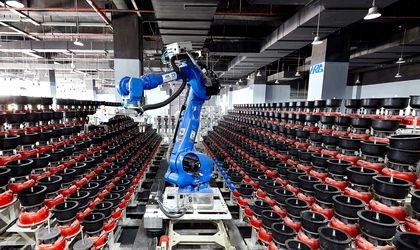 Many manufacturing facilities in Romania ceased operations soon after the Covid-19 outbreak, to help protect employees from the spread of the virus. However, March and May are two of the biggest production months over the course of the year, driven by European production demand, so the effects of slowed production are significant. Production activities may be adapted through increased output over the summer, while higher inventories already accumulated could potentially lead to increased needs for short-term storage options, according to a Colliers International analysis.

In Romania, the production development potential remains high, with first signs of recovery expected in the next months following European trends, as the economic rhythm is strongly connected to those from developed western countries. The majority of local production facilities are now back up and running, but some are still operating at a reduced capacity to respect safety guidelines and to adapt to lower production demand in certain areas.

Production facilities are therefore recording a build up of inventory or awaiting materials and components which are part of the production chain, which will lead to increased needs for more flexible leasing arrangements if demand will not pick up at the same pace as production, according to Colliers International’s analysis. Manufacturing may speed up in the summer to catch up the bad spring months, similar to Western european production facilities. As per Collier International’s calculations, in normal years, peak output for Romania was seen in October-November, which yielded both some 9% in higher production than the monthly average per year, while the second most important period was that of spring, which did not trail too far behind. Furthermore, for automotive, both in Romania and in other major manufacturing countries, like Germany, Poland or the UK, March has actually been the peak month.

“After 13 years since joining the European Union, the domestic clock of local industry is beating at the pace of developed western markets. And as more than 40 percent of Romania’s exports go only to the three main foreign partners – Germany, Italy and France, it was somehow expected that local factories would work at a similar pace. However, Romania and the rest of the emerging countries in the region are more correlated with Germany than with Italy and France in the sense that the impact of the summer holidays is lower,” said Silviu Pop, Head of Research for Romania at Colliers International.

Generally speaking, while the spring period is quite important, except April or the Easter month, the October-November period is by far the most active in terms of production, according to Colliers International’s analysis. This means that any potential second COVID-19 wave during late autumn-early winter months may have even more significant impact on production activities. Although unpredictable, it is a risk scenario that needs to be considered, particularly given how big these months are.

“The market is currently in a state of expectancy, but it has high development potential in the production, due to its better resources of unused labor, at significantly lower labor costs than in other member countries in the region and at costs comparable to the Chinese average. Therefore, a rapid economic recovery – a scenario on which numerous specialists are counting – will generate effervescence on the Romanian industrial and logistics warehouse spaces market, mitigating long-term effects of potentially unfavorable evolutions in the second half of 2020,” says Laurențiu Duică, Partner & Head of Industrial Agency at Colliers International.