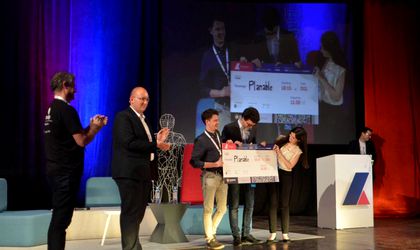 Planable, a startup created by four young people from The Moldova Republic, was declared winner of the Startup Avalanche competition organized within Techsylvania technology event, that took place between May 21-24 in Cluj-Napoca.

Planable is a platform which allows collaboration in real time for the creation of social media campaigns. The Planable team is made up of Xenia Muntean (CEO), Nicolae Gudumac (CTO), Vlad Caluș (CMO) and Veronica Zubcu (PR) from the Moldova Republic, who recently moved to Cluj-Napoca to develop their startup with the help of Spherik Accelerator.

Planable was developed within the Spherik Accelerator, an international entrepreneurship program kicked off in Cluj a year ago,and it won the competition against a total number of 100 projects from 15 countries.

Planable, winner of Startup Avalanche, will be taken to Silicon Valley where startup founders are expected by technology investments and investment funds. The departure will take place in September, and the team will have several months to prepare discussions with investors at Spherik, in Cluj.

Planable is also winner of Pirates in Shore, a competition that propelled them towards Pirate Summit, which will take place in September in Cologne.

The competition was fought between Planable and Aprod.ro, another startup accelerated by Spherik, which aims to put an end to red tape in Romania by facilitating the start of a company in less than 5 minutes.