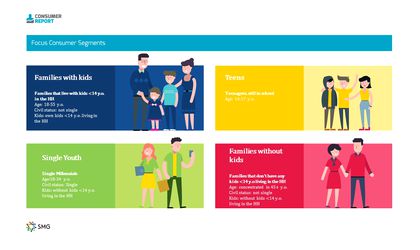 Starcom Mediavest has launched the second edition of the annul encyclopedia Consumer Report. The new material contains relevant information about consumers, based on their age: teens (adolescents with the age between 14-17), single youth (youngsters with the age between 18-34, unmarried and with no children), families with kids (families with children up to 14 years of age), families without kids (in general, old couples, over the age of 45, whose children have left the household).

Taking in account the trends observed in 2015 and confirming them with the ones forseen for 2016, this year’s Consumer Report wants to facilitate a better understanding of the public regarding some important chapters, such as technology & web usage, entertainment, brands & shopping and trends in action. Besides the descriptive side, there is also a case studies section that illustrates the way in which these informations about the consumers will be used in the integrated campaigns.

The technology, beyond its functionality, is a content creator and facilitator, a status indicator or an agregator of the « time spent in the family » (using different devices). The media consumption becomes more and more interesting. We discover a new category of consumers as niche in briefs – mature families – as interesting in the way it aproaches the media channels. They are the ones that once they have discovered the utility of the smartphone or the diversity of the online media they become loyal to it and spend on it in between 4 to 6 hours a day.

Teh content is the « hero ». The one that dictates and creates types of entertainmnet. The mature consumers are into traditional media in a larger proportion, while the younger segments are interested in the type of the content and its quality. The talent shows, the block busters and the games with high stakes are the ones that make the youngsters postition the TV as an alternative to be taken in account.

In this year’s edition, the accesnt laid on the services’ market, offering a general view of the way in which they are consumed by the analized segments and over the sources of influence while taking the decisions in using certain categories of services, such as retail, telecom, medial and financial services.

When it comes to families with children we can observe a new type of « generations’ gap » determined by a multitude of external factors : from limited type spendt with the family daily, after the work hours, to the necessity of working outside the country.

The young people with ages in between 18 and 34, unmarried and with no children (Single Youth) are more and more involved and social responsable. Moreover, they are representing the generation with important hobbies that they desire to materialize by the means of their jobs or extra-jobs.

The mature consumers are more and more active and oriented towards the idea of experimenting (in terms of technology and brands).

The bonus of this edition of the Consumer Report is represented by a series of observations and insights, resulted after the detailed study, refering to the aquizition process of the smartphones, following the consumer categories presented above.

You can find the full report here.

The Consumer Report 2015 is the second study about the Romanian consumers’ behavior launched by Starcom Mediavest Group. The study accumulates data from the SNA Focus study, studies of monitoring over the media consumption, researches developed by Starcom MediaVest Group and data offered by the SMG’s collaborators, such as Ivox or Google.

The media agency launches every month the infographics from the series HumanGraphExperience, as well as “The Future of Money” or “Influence Me”, with the intention of offering constant and relevant pieces of information about the dynamic of the relationship between consumers and the brands and the impact that this evolution has over the brands’ behavior on the market.