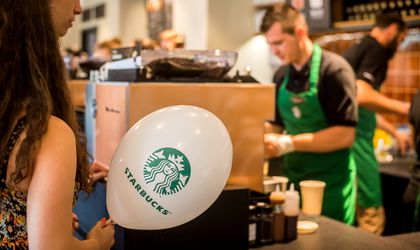 Starbucks operator AmRest has reported a 25 percent increase in gross earnings in Romania, the highest among countries where AmRest operates the Starbucks brand. The company also posted an EUR 17 million net profit in H1 as part of its financial results for the first half of the year.

AmRest, the largest group of restaurants listed in Central Europe, has been operating the Starbucks brand in Romania through a license agreement since June 2015 when it purchased the brand’s previous operator. Starbucks entered the Romanian market in 2007 and currently there are 21 Starbucks cafes in six cities around the country: Bucharest (13), Timisoara (2), Constanta (2), Iasi (2) and one each in Cluj-Napoca, and Brasov.

According to a press release, AmRest’s gross earnings in Romania exceeded 25 percent in Q2, the highest among countries countries where AmRest operates the Starbucks brand. “The solidity of the Starbucks brand and the AmRest expertise in developing cafes were the main factors for increasing profitability,” the release reads.

In the first half of 2016 AmRest opened 40 new locations and în May it purchased 144 Starbucks cafes în Germany. The total number of restaurants owned by Amrest (cafes included), stood at 1,091 on August 12.

„I am very happy to present a record growth within the AmRest group. Results reported for the first half of 2016 reflect positive trends both în what concerns revenues, as well as from the point of view of profitability. The dynamic growth of our network has always played a significant role în the development of the AmRest brand. Due to the organic and accelerated growth on this segment (40 launches în the first six months of the year) and against a background of a well-planned and executed purchasing strategy, Amrest has managed to exceed 1,000 restaurants in the second quarter of the year,” AmRest CEO Henry McGovern said in the press release.