Spotlight Festival transforms Bucharest from downtown to the suburbs 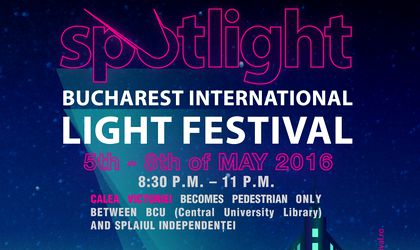 After celebrating the International Year of Light in 2015, with Spotlight’s first edition, ARCUB – The Cultural Centre of Bucharest Municipality is delighted to announce the second one, between 5th and 8th of May.

Official opening takes place on 5th of May, at 20:30, in George Enescu Square with a special concert Zoli Toth Project, followed by the  breathtaking Lords of Lightning’s show from UK.

From 20:30 up until 23:00 during festival days, everyone is invited to walk alongside Calea Victoriei Avenue, between BCU (Central University Library) and Splaiul Independentei and discover art installations, architectural lighting and video mapping projections, created by Romanian and international artists.

The grand opening of this year’s edition is as dynamic and breathtaking as can be. Inspired by the genius of inventor Nikola Tesla, Brit artists from Lords of Lightning come to Bucharest with a show where the power of electricity takes center stage.

Watch out for the 12 meters inflatable giant. Made of bright light that shines in the night, this huge creature sets out to explore a new world. Designed to spread the message that our planet is a truly fantastic wonderland, the installation takes after the 1973 science fiction movie with the same title.

Designed initially for a university project, this 60 meters long Dutch installation is a challenge for the senses. Step into a world of ever changing colours, where patterns screened on the floor completely redefine the surrounding space.

A 13 meters wide urban mirage, this mobile screening consists of seven minimal graphic elements that are constantly interacting. The Dutch installation lets itself discovered in a slow pace in order to induce a relaxing, very special effect.

Multi-coloured penguins take over the city and amuse the passengers. Out of all the penguins with their ever-changing colours, Fynn and Dana are the most talkative. Find The Penguin Army and pay attention to what they are communicating!

Inspired by the idea of the existence of multiple dimensions, Mindscape Studio has created a light sculpture that suggests a new type of existence in space and time. This year commemorates 140 years since the birth of Constantin Brancusi. The installation is a tribute to the great artist and refers to his “Endless Column”.

Care for a moving planetarium? Experiment the immensity and complexity of the universe with this translucent screening of the sky with all the moving celestial objects and constellations.

Location: 41 Calea Victoriei, in front of The Music Store

What if the entire facade of the Novotel Hotel turns into an optical illusion? This interactive video mapping allows the participants to express their creativity in real time. Using two midi controllers, one can produce and modify the visual images projected on the facade of the building, as well as change the colours, the shapes and also create audio effects and make diverse elements move.

Romanian artists from Les Ateliers Nomad designed a XXI century reinterpretation of the „carnival hammer”. The passengers are invited to show off their strength by simply hitting the drum connected to the Telephone Palace. The force of the hit instantly lights the windows of the famous building.

Five brightly lit angels descended on the streets of Bucharest. Each of them is unique, with their wings in ever-changing colours, the Angels of Freedom allure passengers to approach them, choose their favourite and become part of the show while stepping in the place of a fantastic creature. Ready steady selfie!

Location: Small square in front of the Odeon Theater

One of the most known landmarks of the city is to be reinterpreted in a most attractive way, by a visual show of interchanging colors and shapes.

The Aram Boxes project uses an enhanced version of the photographic image transformed by a selective lightning technique. Look for the arches of Rosenthal building from Calea Victoriei and wait for the surprise. . The contrast of the installation is a reminder of human complexity, only to be decipherable by the projection that each individual leaves behind.

Have you ever wondered what comes next after the selfie mania? Discover 3D Selfie, the installation that will revolutionize your social media accounts. Get you own 3D scan, download it and share it online. There you go, the most innovative selfie ever!

The installation that represents Romania to Amsterdam Light Festival and has been included in Luminade Walking Tour is an instrument that illustrates the „unity in diversity” concept. Come closer, grab the handles, invite other passengers to join and rotate the kaleidoscope together! Otherwise, just sit around and enjoy the European Dream.

We, the humans, think of ourselves as the most powerful creatures roaming the face of Earth. The HoloFace tries to challenge this feeling of self-importance and lets you control the face of a god of light. Huge in size and presence. From this change of perspective one should become aware that the way we relate with the smaller, apparently less important things around us, is the way the higher things relate to us.

Hikarinoki is the tree made out entirely of green recyclable materials that contracts anyone around with a good mood. The installation made its debut at Lyon Light Festival in 2009 and is famous for transforming its surroundings with bright lights. A symbol of life, Hikarinoki is the link between earth and sky, a place where different worlds meet.

It’s all about looking at life from different perspectives, that’s what the artists at The Temple say with their intriguing photo setup that can only be deciphered when interacting with the installation. The experience can be captured in a short video created especially for Facebook profiles.

Embodymento creates multiple identities for one urban building. Choreography and elements of the facade mingle with repetitive visuals, optical illusions, spaces and textures that are either minimal-abstract or elaborate and luxuriant.

Music gets a new dimension with this Silent Strike installation that created or modified a compilation of songs in order to let participants experiment them beyond sound, time and space. Step into this overlap of circles screened on the ground and you’ll soon find out that each represent an instrument. Lose yourself to music and visualize the bass, piano and violin chords.

ARCUB – the Cultural Centre of Bucharest fosters the Capital’s cultural identity since 1996.  The projects initiated and carried out by ARCUB have contributed to the diversification of the city’s cultural life, as well as to its inclusion among the great Capitals of the world.