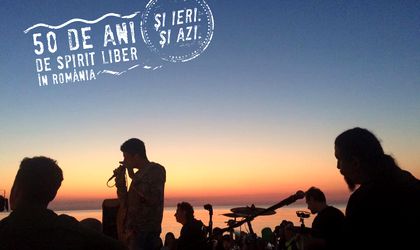 Pepsi and Romanian group Vama challenged the crowd present at the band’s concert to experience in the most authentic manner the definition of a free spirit (#spiritliber) after the lead-singer stopped in the middle of a song and announced everyone Pepsi has an impossible to refuse proposal: continue the concert on Romanian seaside resort Vama Veche.

Therefore, those who felt they are free spirits were invited to board the busses prepared by Pepsi and go to Vama Veche to see the continuation of the concert and also see the sunrise at the seaside.

As a result, 150 people took the challenge and lived an unforgettable moment. The three Pepsi busses weren’t big enough to transport everyone, but the people at the concert decided to go anyway, after calling their closed ones to announce the trip.

The caravan of Pepsi busses and privately owned cars went to Vama Veche, with music accompanying on the way. Reaching the seaside at 4 in the morning, the Romanian group Vama took the stage and offered an acoustic concert to its fans. After an hour of music and experiencing the sunrise, the participants were invited to start their ride back to Bucharest.

“We are talking many times about real-time marketing. We wish it because we know it is only that way we can make a difference on a market chocked with communication which is sometimes functional, sometimes emotional on purpose. And who else could’ve done this real time marketing if not 2 real brands? Two brands that can generate emotion to its purest state? This is practically how this concert was born. Pepsi and Vama, 2 brands who know how to generate WOW. And because Pepsi is celebrating this year 50 years of free spirit in Romania, we wished 2016 to be a year of unforgettable experiences for all those living with this brand, no matter the age. And it was just a step from here to the event,” said Cristina Radu, group brand manager CSD & Energy Drinks PepsiCo Romania.

“Friday night (July 22nd – e.n.) was, for all present, a moment they will never forget and that will talk about after years and years, with the same shine we saw in everyone’s eyes in the night of Vama’s concert. It was an experience crafted for those who really are free spirits. And guess what? They exist! They are those who ran towards the gates when Tudor Chirila made the super-announcement – We leave for Vama!-, those who called their families to announce they come home the second day, those who called friends to leave for Vama because they didn’t catch a spot in the busses, those who sang loud and clear Vama’s songs (…), those who saw the sunrise from seaside…those who dared to be what they are, free spirits,” also added Cristina Radu.

Pepsi’s anniversary campaign “50 years of free spirit in Romania. Yesterday. And Today” targets Romanians who are looking for moments of free spirit, no matter their age. Even since the year began, Pepsi encourages Romanians to put their passion beyond anything, to surpass their limits by challenging the rules and status quo, same as they did during the last 5 decades.