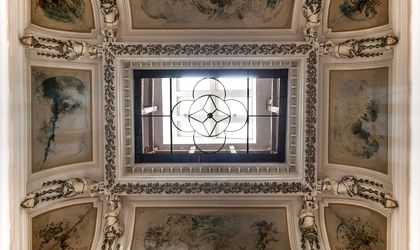 The new technocrat government has come with significant changes, among which is a special focus on what’s happening regarding our national heritage. It seems that collaboration between ministries and institutions has positively developed and they are trying to preserve and protect whatever is left nationwide by finding concrete solutions and hiring key-persons to make it work. BR dug the field with the specialists to find out what still stands and what’s going to be changed.

To talk in concrete numbers, on the official and recently updated List of Historical Monuments there are 30,148 monuments nationwide. Since 2010, only 49 monuments have been decommissioned, while 644 new ones have been put on the list. From a structural viewpoint, the monuments are grouped according to their nature: architectural monuments, public monuments and funerary monuments and memorials. At the present time, the Ministry of Culture announced almost 600 monuments which are in a collapse or pre-collapse state, but the situation might be much worse, as no one has made an official inventory of the state of these sites.

According to the current National Defense Strategy for 2015-2019, one of the objectives of national security concerns promoting national identity through preservation and valorization of cultural and natural heritage. But how has it worked so far? After the terrible fire that took place on October 30, 2015, the political government was changed with a technocrat one. The current Minister of Culture, Vlad Alexandrescu, who has in his portfolio the national heritage among others, has made some significant changes and the promises are that he will continue to fight for saving and preserving what is left of the monuments.

For 2016, the budget of the Ministry of Culture is around RON 773 million (EUR 171 million), meaning 0.1% from the country’s GDP. Although it’s quite small, the amount has increased significantly from 2015, by almost 26 percent.

Regarding the national heritage and patrimony, in five months, Vlad Alexandrescu has managed to make some significant changes. The National Heritage Institute has a new director, currently in charge, architect Stefan Balici from January 2016, while the institution is directly subordinated to the Ministry of Culture. Through this institution, Romania is given funding for monuments that need restoration – but only for those which are state-owned or religious cult-owned and the budget is quite limited for the actual needs. For this year, the Restoration of Historical Monuments National Program’s budget is RON 50 million, and the amount doubled from last year, as Stefan Bilici explained to Business Review. Currently, on the restoration list are 160 monuments, and for some of them, construction hasn’t started yet. Moreover, nationwide there are 50 active construction sites. But the major problem now is that the institute doesn’t have an emergency budget in order to make rapid interventions on those sites where the buildings have collapsed. Vlad Alexandrescu decided to propose to the president a National Pact for Patrimony to direct funds for monument buildings that are collapsing or that are in an advanced state of degradation. “This would be similar to the National Pact for Defense, which was signed last year by the major political parties at President Klaus Iohannis’ initiative,” explained the minister in an informal meeting with the press. According to him, the state should direct 0.2% of the GDP, meaning EUR 320 million each year especially to the restoration of local heritage. “Basically, the pact started from the principle that we have in the national defense strategy the patrimony as a national security objective and we should take proper care of it,” added Alexandrescu at the same meeting. The idea is that the pact should be applicable to anyone in charge of the institutions directly involved, regardless of the governing party. The initiative has come up after two heritage buildings collapsed in Brasov county at the end of February and they didn’t have an immediate solution for restoring the sites.

Moreover, Vlad Alexandrescu has proposed a new commission of 18 specialists for writing the new Code of Patrimony. This code has already been on the Minister of Culture’s list since 2007, but no further actions have been made until now. This commission gathers part of those who already worked on the drafts of the code, as well as other independent specialists. One important chapter of this Code of Patrimony will be dedicated to sanctions, though the legislation is too evasive at the present being.

The minister also nominated another person, Irina Iamandescu, to rewrite the UNESCO file regarding Constantin Brancusi’s ensemble and hopes are that by 2017, Romania can re-propose the monuments on the world’s heritage list.

Regarding this collaboration between institutions, an interesting situation came up in December 2015 in Cluj Napoca. Hintz House, also known as the Pharmacy Museum, which exists since 1573, being the first pharmacy in Cluj, was almost in the situation to close its doors as the owners wanted to sell it. Its value was estimated at EUR 2 million, notes local portal Gazeta de Cluj, and due to the importance of the place and the impressive collection which is hosted by the Pharmacy Museum, the Ministry of Culture decided to buy the entire building. After negotiations with both government and local authorities, the solution came from the city mayor of Cluj-Napoca, Emil Boc, who will buy the building in order to maintain the museum, as the Minister of Culture recently confirmed. “With diplomacy and negotiations, we managed to save the monument. Neither us, nor the government had the budget to buy the house, so we convinced the mayor to do it. This is how we want to collaborate with the local authorities because the ministry’s budget is so small that we can’t do many things,” explained Vlad Alexandrescu publicly.

The Patrimony seen through specialists eyes

BR wondered how a specialist sees the current situation regarding the national patrimony so we talked with the restorer Elena Martin. “In Bucharest, and not only here, the state of conservation of these heritage buildings is evident, some silently disappearing from the urban landscape, others turn into pages of history of kitsch. What intrigues me personally is the unfortunate association between old and new buildings, which are very tall, with an inappropriate height. Neighborhoods become a mix of new and old, cramped, bare, desperate to conquer each and every piece of land. Sure, Bucharest as well as other capitals needs to develop but I do not understand why this development practically swallows our history bite by bite,” explained the restorer to BR. When it comes to buildings which are under seismic risk, Elena Martin considers that a full package of measurements should be taken in order to prevent the collapse situations, with a special focus on the owner – if he doesn’t care about the monument, he/she should be sanctioned, otherwise they should be helped, if support is needed.

Anthropologist Vintila Mihailescu makes some analogies for BR in order to explain what patrimony means. “In the countryside, in traditional societies, people still ask you “whose are you”. The question is relevant because it is still believed that this “whose are you” says something important about “who you are.” The heritage is the modern answer to this question: tell me what heritage you have and I will tell you who you are. However, we should specify that this heritage isn’t the equivalent for the family you belong to, but the genealogy that you choose: heritage is part of the past that you identify with in the present being,” explains the anthropologist. “In these circumstances, a piece of heritage does not disappear along with its original function; quite the contrary, it becomes heritage if it has a present signification. Otherwise, a building, for instance, ceases to be heritage even though it is still functional. It becomes a non-time, in the same sense that we can talk about non-places: the social memory, the identity significance, is empty. Neglecting and destroying the patrimony of a society can be considered as a condemnation to amnesia, thus leading to the dissolution of identity,” added Vintila Mihailescu. Asked the same question about the current situation of the monuments in Romania, the anthropologist declared that it is dramatic. “More dramatic is the fact that we don’t really know which is/were this patrimony. The patrimony is more than a sum of heritage objects listed; it’s almost a state for me. This is why I prefer to name them “cultural passages,” which contain the physical “object” but also the context, the atmosphere, the cultural and emotional significance. ”

Second part of the piece coming soon: Bucharest patrimony buildings that got a nip/tuck