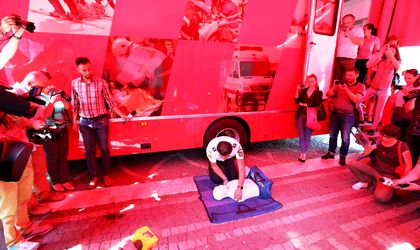 The caravan SMURD “Be prepared” is in Bucharest between September 9 and 11 to teach people how to act in emergency situations. The project is initiated by the Foundation for SMURD and implemented with the help of Vodafone Romania Foundation, which contributed with EUR 400,000 out of the total investment of EUR 523,000.

„The Vodafone Foundation Romania is glad to contribute to the successful implementation of the caravan ‚Be prepared’. The foundation is focusing its activity and resources in four areas-health, education, social services and volunteering and the SMURD caravan is the type of project that reaches all these areas, ” said Ravinder Takar, president and CEO of Vodafone Romania.

Moreover, Arafat added that since the launch of the project two month ago, the impact is positive and people are more and more interested, so that the training room from the caravan is always full. The objective is to teach 7,000 people from 20 localities from Romania until the end of the year on first aid courses. Also, he said that there are courses for children in schools and that he plans to launch a game for children in October at Cluj to teach them how to act in emergency situations.

In the next two months, the caravan will go to Buzau, Bacau, Piatra Neamt, Iasi, Botosani and Suceava.

The collaboration between Vodafone Foundation Romania and SMURD started in 2004. A year later, the first tele-medicine system was implemented for SMURD ambulances and in 2009 the first command center was acquired. In 2014 was launched the first mobile application for emergency situations.

Vodafone Foundation Romania is a nongovernmental organization founded in 1998.

SMURD foundation is a non-governmental organization founded in 2006, independent of any Romanian and foreign institution or person, that supports SMURD projects.