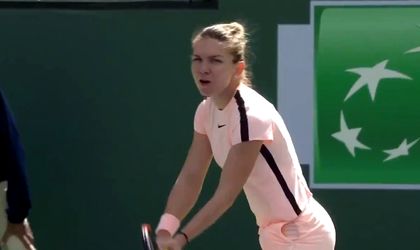 World No. 1 Simona Halep suffered a shock defeat at the hands of unseeded Japanese player Naomi Osaka, whom she had defeated in their previous three meetings. The Romanian bowed before the final of the Premier Mandatory event in straight sets, with Osaka prevailing 6-3 6-0 in just 64 minutes.

So far, Halep had an impressive record this year, having lost only once, in the final of the Australian Open. In her second defeat of the year, the Romanian player showed a drop in form in the first set, at 3-3, and never managed to recover, while her opponent showed composure and resilience.

Osaka broke serve five times and had percentage of 67 percent behind her first serve. Halep, on the other hand, converted just one of the seven break points she created in the match and landed just 56 percent of her first serves.

Halep said she just couldn’t adjust to the conditions, the late night match, the long wait.

“I tried my best to be ready to play the match. I don’t find excuses. I just explain what it happened. I just was not ready, and I played wrong,” said Halep after the match. “I played ok until 4-3, but then I lost my concentration, I don’t know why. The positive is that I played semis after so many weeks off. It’s tough of course, but I’ll shake it off and tomorrow is another day,” the Romanian player said, quoted by Ubitennis.

The 20-year old Osaka will play Daria Kasatkina for the title. On the road to the final, the Japanese player downed Maria Sharapova, Agnieszka Radwanska and Karolina Pliskova.

Simona Halep will play next in Miami, at the Miami Open (March 20 – April 2).