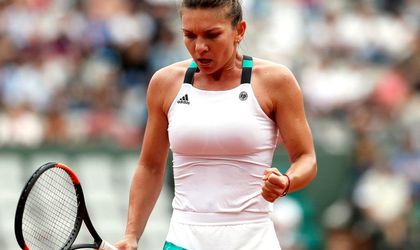 Romanian No 1 Simona Halep qualified for the quarterfinals of the Roland Garros tennis tournament, the second Grand Slam of the year after breezing past Spain’s Carla Suarez Navarro in straight sets.

Halep surrendered just two games in her demolition of Suarez Navarro, who didn’t manage to put up a resistance, save for the beginning of the second set. Nevertheless, the 28-year-old looked overpowered by the speed and precision of Halep’s shots, which powered her towards a clear victory, at 6-1, 6-1. The Romanian, who moved to the quarterfinals of Roland Garros for the second time in her career, struck 19 winners in the 60 minute match, the first on Court Philippe-Chatrier.

The 25-year-old Halep, the tournament third seed, managed her first clay court win over the No 21 seeded Spaniard, who is currently one of the most experienced clay court players on tour. In their previous encounter, on the hard courts of the US Open, Halep came ahead with a 6-2, 7-5 victory.

Halep is expected by many to lift the Coupe Suzanne Lenglen on Saturday, given that she has shown stellar form throughout the clay court season, when she made the finals in Rome and previously successfully defended her Madrid title. Still, Halep came to Paris while still nursing an ankle injury she sustained in the final of the Rome tournament, which she lost to Ukraine’s Elina Svitolina.

Next, Halep will face the winner of the match between Svitolina and Croatia’s Petra Martic for a spot in the semifinals.