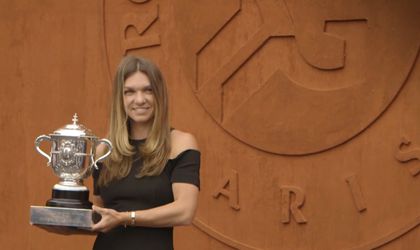 Simona Halep, number one in the WTA rankings, has been named world champion by the International Tennis Federation (ITF) in 2018, after winning her first Grand Slam title this year at Roland Garros.

“It’s a great honor to be named the ITF World Champion for the first time. It was an incredible year in which I won my first Grand Slam title at Roland Garros and I’m ending the year as number one in the world. To receive such recognition is something special and it gives me extra motivation to continue to work hard,” said Halep, quoted by the ITF website.

Halep will finish first in the WTA ranking for the second year in a row.

ITF writes that Halep played a final at the Australian Open in 2018, losing to Danish Caroline Wozniacki after being defeated by Jelena Ostapenko in 2017 in the final at Roland Garros, where she had previously lost another final to Maria Sharapova.

The ITF is reviewing the Romanian’s circuit until the final in Paris with victories against Angelique Kerber and Garbine Muguruza, and the spectacular return in the final with American Sloane Stephens with 3-6, 6-4, 6-1.

“The victory further emphasizes Simona Halep’s fighting spirit, which she demonstrated through two other titles conquered in 2018 in Shenzhen and Montreal,” the ITF said.

The Romanian season was shortened by medical issues, which deprived her of the Tournament of Champions, but Halep ended the year with a record of 46 victories and 11 losses and holds the first place in the WTA ranking.

Halep is the third Romanian player to win an ITF world title, after Florin Mergea and Horia Tecau were the champions in juniors’ doubles in 2002 and Tecău won the title in doubles in 2015.

Serbian Novak Djokovic has been named world champion for the men’s singles, the Czechs Katerina Siniakova and Barbora Krejcikova have taken the ITF title in women’s doubles, and the Americans Mike Bryan and Jack Sock in men’s doubles.