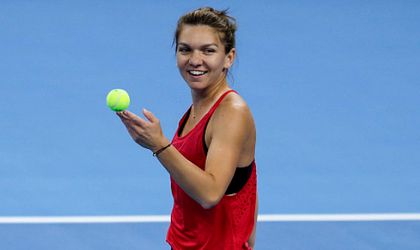 Romanian tennis player Simona Halep will occupy the No. 1 spot on WTA’s new rankings, to be released on Monday. Halep defeated her Roland Garros conqueror Jelena Ostapenko 6-2, 6-4 in the semifinals of the China Open, the last Premier Mandatory tournament of the year.

During the tournament Halep avenged her loss to Maria Sharapova in the first round of the US Open, as well as her Wuhan defeat at the hands of Russia’s Daria Kasatkina. She downed Ostapenko in two straight sets, setting the head-t0-head at 1-1 after the talented teenager denied her her maiden Grand Slam title at Roland Garros. The Romanian prevailed after previously being three times just one win away from becoming the leader of the WTA.

After the match, the Romanian player was invited on court where she watched a video presentation showing her lift trophies and hit winners in the many matches she has played since entering WTA Top 10. She was also presented with a red flower arrangement shaped as a No.1.

“It is very emotional. It is amazing that I could do this. Thank you everyone for supporting me. My family, everyone who is now watching me. Thank you for everything. It’s my special day. Thank you everybody. And I am waiting for you tomorrow. The tournament is not finished,” Simona Halep said on court.

Simona Halep is the first Romanian player to reach the top spot in the WTA ranking. She will meet in the finals of the China Open the winner of the match between France’s Caroline Garcia and Czech player Petra Kvitova.