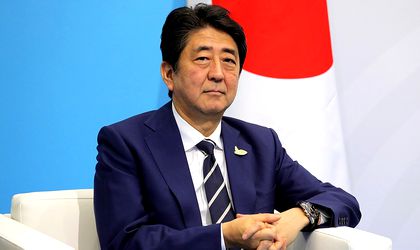 PM Shinzo Abe will meet with president Klaus Iohannis on Tuesday, in a first visit undertaken by a Japanese head of government in Romania.

According to the Presidential Administration, Abe will have close talks with Romanian officials and will attend a dinner with Iohannis.

The visit comes five years after Romania renewed its partnership with Japan. Abe arrived in Bucharest just as PM Mihai Tudose presented his resignation following a conflict with the leadership of the ruling party PSD.

It’s not clear if Abe will meet with any government officials at Palatul Victoria.

The Japanese PM is joined by representatives of dozens of companies and his European tour includes stops in Estonia, Latvia, Lithuania, Bulgaria, Serbia and Romania.

For instance, Mitsubishi officials will attend meetings in all the six countries visited by Abe.

According to AFP, Abe is trying to get diplomatic support for his country’s position regarding the security threat posed by North Korea.