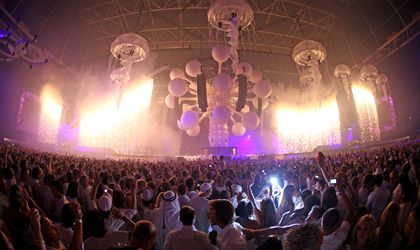 Top names such as Fedde Le Grand, Eric Prydz, Pete Tong, Hardwell, but also Romanian talents such as Greeg & Onuc are among the DJs at the turntables during Sensation, the largest dance event in the world, which will turn the Romexpo venue in Bucharest into an Ocean of White.

Sensation is a cocktail of music, dance, lights, theater, choreography and pyrotechnical effects that will take place on April 21, starting 21:00, at Romexpo. Access is allowed only to people above 18. The Central Pavilion of the venue will metamorphose into an aquatic universe, which will include a water channel and 48 fountains that will throw water close to the roof, to the beat of the music.

The event is also famous for imposing a dress code- all participants must dress completely into white. The only things of different colors they are allowed to wear are shoes and accessories.

“Sensation is traditionally a sold-out event in several hours in other countries,” according to Sorina Burlacu, general manager of promoter Events.

Only 500 tickets in the Ring category are still available. A part of the price of the tickets that are sold will go for charity, to the foundation Dance4Life, which is a platform for the fight against HIV.

See the trailer of the event below.

Ocean of White, which premiered on July 5, 2008 in Amsterdam is one of the most grandiose Sensation productions, where the stage span over the entire Amsterdam Arena, nearly 160 meters.

Tickets are available in the Eventim network in the Germanos, Orange, Vodafone stores and Carturesti and Humanitas bookstores as well as online at www.eventim.ro.