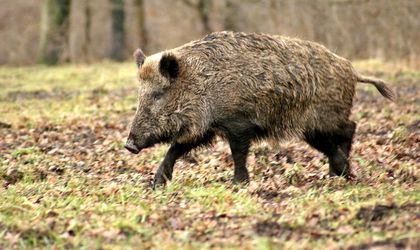 The Romanian government has ordered the culling of all wild boars and predatory animals in the Danube Delta and the region including Tulcea, Constanta, Insula Mare a Brailei and Balta Ialomitei, as well as wild boars in the areas bordering Hungary, the Ukraine and the Republic of Moldova, all due to the swine fever outbreak.

Hunting fund owners must shoot a few individuals of the species, and if tests are positive for swine fever they need to shoot all animals in the fund and bury them in special areas designated by the Sanitary-Veterinary Direction.

Based on the plan issued on July 27 by the Ministerial Committee for emergency situations related to fighting swine fever, another measure package has been adopted on August 1, referring only to the hunting fund of Romania, specifically wild boars and other predatory animals, as well as the plants affected by these animals.

The plan says that all the animals in the areas bordering Hungary, Ukraine and the Republic of Moldova will be killed by authorized hunters with the support of the Internal Affairs Ministry. Plants and cultures affected by these animals will be neutralized as well. Furthermore, the hunting quota allowed will be increased in order to reduce the number of wild boars at the national level.

If swine fever is found, all the predatory animals will be killed on a 200 km radius from the place where the virus was identified. The category includes species like wolves, bears, jackals, and even the white-tailed eagle, a natural monument.

In Tulcea, Constanta, Insula Mare a Brailei and Balta Ialomitei, as well as in the Danube Delta, the order is even harsher: all wild boars and predatory animals must be killed as a preventative measures.

All institutions involved in the process must calculate the costs and send the details to the Finance Ministry. For example, lab tests for a single boar cost RON 65, but the total cost of the operation is still unknown.

The president of the Sanitary-Veterinary Authority explained that the swine fever virus entered the country via two sources: through infested pork products that were illegally brought into the country, as well as through the wild boars in the Danube Delta which had contact with domestic swine that were raised in wildlife conditions in the Delta.

The virus that causes the African swine fever is harmless for people and other animals, but it is deadly in most cases for all boars and farm swine. There is no vaccine yet for the disease and animals usually die within ten days.