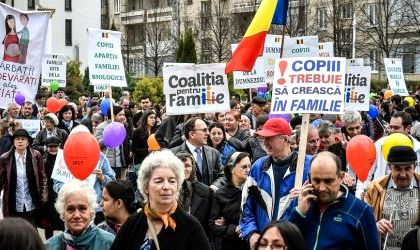 The leadership of the left wing party PSD decided on Monday to stage a major rally, in May, in support for the traditional family.

In the same month, Romania should hold a referendum aiming to redefine the family in the Constitution. At present, the Constitution states the family is formed through the “consenting marriage between spouses”. In the amended version, the article would state that the marriage is between a male and a female.

“We want to organize this rally and we took this decision so there isn’t any comment regarding PSD’s approach on this topic,” said Dragnea following a meeting with the party’s top political brass. Dragnea reportedly said that he wanted 1 million people to attend this rally, according to media reports.

In late March, the Chamber of Deputies approved the amendments to the Constitution that would back the change in the definition of the marriage.

In 2015, the Coalition for the Family, a civil initiative without legal personality, initiated the procedure to change the Constitution so as to define the family as being formed by the marriage between a male and a female.

The Coalition for the Family has among its members dozens of associations and foundations active including religious organizations and those specialized in the protection of children and the disabled. Priests, singers and media personalities are among the backers of this initiative.