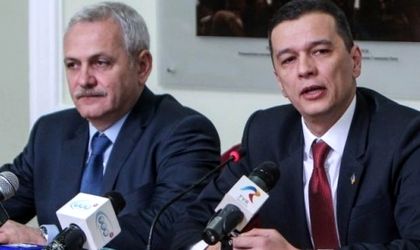 The ruling coalition comprising the Social Democratic Party (PSD) and the Alliance of Liberals and Democrats (ALDE) plan to topple the government led by Sorin Grindeanu through a vote of no confidence in Parliament.

The two parties opted for this move after PM Grindeanu said he will not step down unless president Klaus Iohannis appoints a new PM that is a member of the PSD.

Meanwhile, the spokesperson of president Iohannis said that a new PM can be proposed if the current head of the government steps down or is removed through a vote in Parliament, according to the Constitution.

Calin Popescu-Tariceanu, ALDE head and president of the Senate, said that the vote of no confidence could take place next week. He suggested that the motion will be approved by MPs in ALDE-PSD coalition, who hold the majority in Parliament.

Tariceanu said that Grindeanu has to go because he was not fit for the job and because he has “a political agenda which is not only parallel, but also totally divergent in relation to certain interests.”

On late Thursday, Grindeanu wrote on Facebook that the PSD might lose the power in government due to the efforts of the social democrats to kick him out of Victoriei Palace. He strapped of his PSD memership after 20 year, according to a decision taken by the party’s top brass.

Despite the conflict between the government and the PSD leadership, things went on normally at the Victoriei Palace and the PM met with the British minister of defense, Michael Fallon. He also had a meeting with a delegation of German investors in Romania.

As the political crisis unfolds, the Romanian currency fell by 0.45 percent against the euro to 4.5872 on Thursday, close to the lowest level since August 3 2012.

PM Grindeanu has been in power for around six months. In a press conference held Thursday evening, Grindeanu said he will resign if Dragnea steps down by Monday or if he realizes that the current government can’t get any things done going forward.